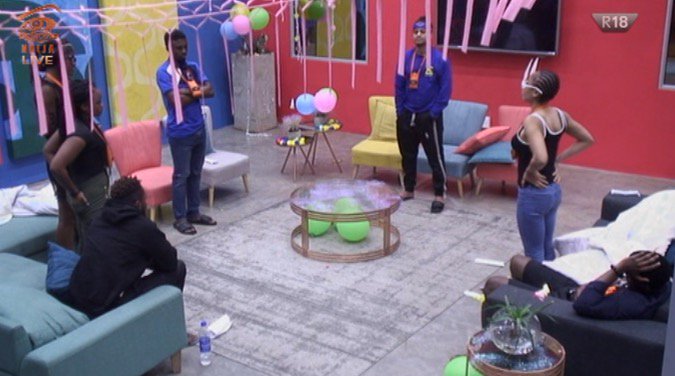 Come Closer
Having gathered in the lounge, Head of House Khloe entered the booth card to pick one of the four chance cards. She returned to her throne ready to open it and read its content aloud, but Biggie told her to hold on until he instructed her so. One by one, Housemates were called into the Diary Room and had to Nominate two fellow Housemates for possible Eviction.

Thrown Under The Bus

Tobi Nominated Nina and Lolu, whom he never really took to liking ever since the beginning. Head of House Khloe wanted to see Nina and Alex out of the House, which may well happen. Miracle on the other hand has remained consistent throughout his Nomination sessions: week after week,he kept to Nominating Cee-C and Lolu. As for Alex, she didn’t hesitate to name Rico Swavey who had become a confidante and Cee-C for reasons known by herself. For Lolu, the choice was easy as he Nominated Cee-C and Miracle, unknowingly returning Miracle’s favour. Anto had a different perspective as she wanted to see Rico and Cee-C up for Eviction, while Rico had reluctantly volunteered Cee-C and Lolu for the Exit. As for Nina, Lolu and Cee-C had to go, if anything because she still resented Cee-C since their clash. Last but not least, Cee-C Nominated Alex and Anto for possible Eviction, not knowing she would be among the Nominated ones.

Asides from Tobi, Anto and Khloe, it is two thirds of the House that are kept on their toes ahead of the Eviction show. Yet Biggie wasn’t done with Housemates as he called HoH Khloe to step forward and review the content of the envelope containing her chance card. She read it and to her greatest surprise it only offered her Immunity and nothing else. This meant Khloe had no privilege to Save or Replace any of the Nominated Housemates. Biggie nonetheless asked her to choose the Housemate she wanted to share the lottery bedroom with, and she didn’t hesitate to name Rico Swavey who replied with a thumb up movement.

Alex, Cee-C, Lolu, Nina, Rico Swavey and Miracle are up for Eviction. Vote for your favourite Housemate here or via SMS. Voting closes on Thursday 5 April at 21:00 WAT.