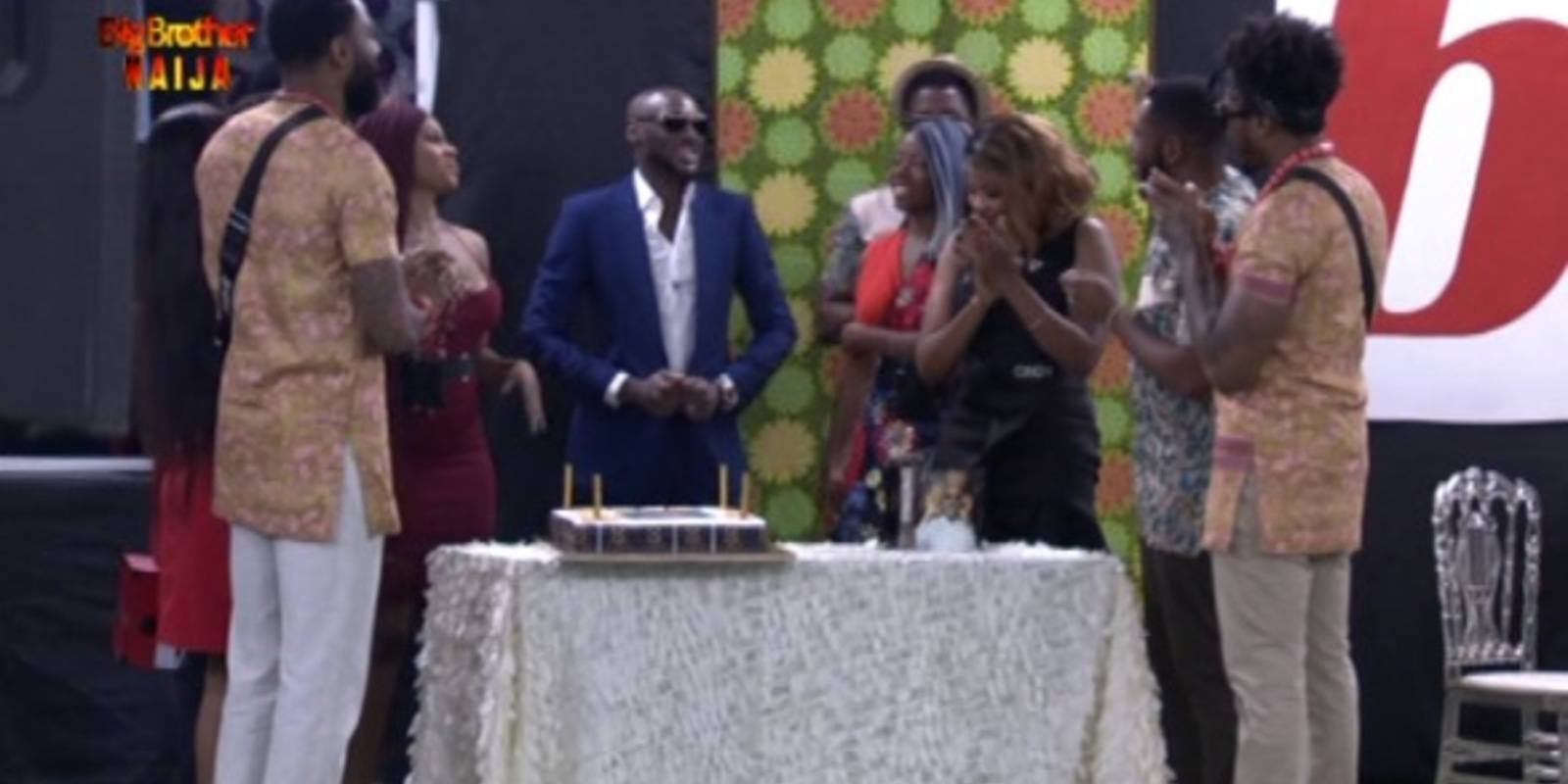 Yes, you heard right! Last night was epic in the House as the Housemates got to celebrate 2Baba’s birthday with him. Imagine the thrilling night they had as they soaked in all the fun and enjoyed the night, minute by minute.

Although the Pepper Dem Gang did not see the surprise coming, they knew Biggie had something big in store for them. This could have been as a result of not getting a Wager Task brief, which made them as eager as ever. “What could Biggie be up to?” They constantly questioned themselves.

Barely before the time for their usual Wager presentation, Biggie asked the Head of House to make an announcement – he had a surprise waiting for them. So, in anticipation of this surprise, he provided his guests with some fashion treats from Gbemisoke Shoes and Lizzie’s Closet to keep them looking peng and gorgeous as ever.

This must be one heck of a surprise.

…And then the bell rang.

What? A whole legend in the House? Imagine the excitement on their faces as they welcomed 2Baba, Larry Gaaga and Efe Omorogbe into the Pepper Dem House, For Tacha and Omashola, “elated” couldn’t quantify how they felt that moment.

Trust 2Baba to turn a spicy House into a spicier place. Not surprised right? We thought so too. From the gist with the Housemates to the laughs and hugs, it was a cruise ship in the Pepper Dem House.

Nothing keeps the Pepper Dem Gang closer than gist time and this time around, 2Baba came to the House with a large dose of it. First of all, introduction! One thing the Housemates derive pleasure and pride in is introducing themselves to Biggie’s surprise guests and today was no exception.

Next, they took turns in asking the legend questions about the industry and success tips that every celebrity should have. In anticipation for the famous lives ahead of the, we reckon.

To wrap it up, 2Baba introduced his new product to the lucky Pepper Dem top ten as he talked to them about launching his branded headphones. A piece of music equipment from the music lord himself? Yes, please!

Party time! What would it be like partying with 2Baba, you may ask. Well, let the Pepper Dem Gang show you.

To celebrate his birthday, he was welcomed into the beautifully set up Arena, where the Housemates chorused a happy birthday song for him. Thereafter came the cake cutting and we bet you can already guess who was at the forefront of this activity. Our very own Cindy!

The Housemates got up to so much fun. The karaoke games which feature Seyi, Tacha, Omashola and Cindy had us rolling on the floor. Ah, who would have thought that sucre papito had such moves? The Housemates danced and danced like there was no tomorrow, while of course, doing what they know how to do best – eat! Even Mike gave us the best zanku moves we’ve seen all year, all thanks to the amazing band, Alternate Sound.

The Housemates weren’t the only ones that showed us how to have fun. Larry Gaaga and 2Baba took the lead in dancing as they grooved hard to their classic songs.

Oh, and there was the moment when the legend recognized love in the air…

In addition to the already lit night, Biggie ushered in dancers to get the night rolling. Kholi and Okiemute performed beautiful renditions which got the Housemates in a good mood. We’re sure you also had a great time partying with them.

Trust the Pepper Dem Gang to show up when it comes to food matters. We’re sure Biggie even understands which is why he asked them to take some cake and food back into the House.

Guess what? They all left with packed food and wide smiles on their faces as they stashed food aside but they forgot to take the Red Box back into the House…

What happens next? Stay tuned!