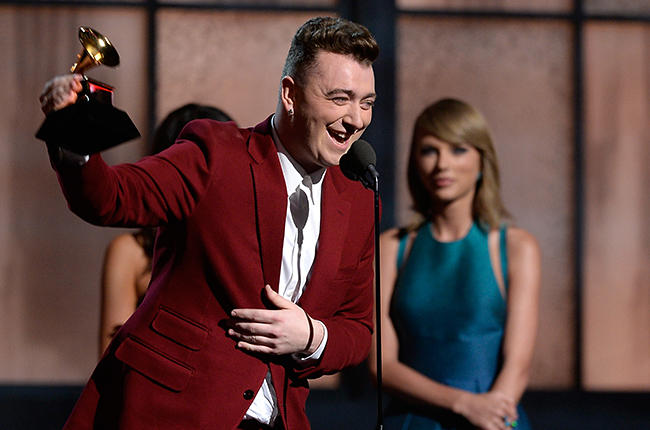 The music industry’s biggest stars were all at Sunday’s 57th annual Grammy Awards at the Staples Center in Los Angeles.

Smith and Beyonce were tied for the most nominations with six, but Smith has more in the major categories. Still, Beyonce’s six nods have officially made her the most Grammy-nominated woman in history, passing Dolly Parton. Iggy Azalea has four nominations.

Watch Sam Smith Sing ‘Stay With Me’ with Mary J. Blige below.

For the Grammy crowd, Usher covered “If It’s Magic” from Stevie’s 1976 opus. His rendition stayed true to the original, with his own vocals and some elegant, minimal harp-playing providing the only backing. Watch until the end to see Wonder himself pop out to greet Usher.

Rihanna, Kanye West and Paul McCartney took the stage at the 2015 Grammys on Sunday, Feb. 8 to deliver a live debut of “FourFiveSeconds.”

Similar to the official music video for Rihanna’s lead single from her upcoming album, each of the three artists — in matching black suits — had their own moment in the spotlight: Rihanna flexing her vocals, ‘Ye sing-screaming and McCartney strumming along.

Pharrell Williams put on one of the night’s most memorable performances.

Williams — in a bellhop-inspired outfit and yellow sparkling shoes — pulled out all the stunts for his “Happy” performance. He was joined by pianist Lang Lang and film composer, music producer and guitarist Hans Zimmer. As Zimmer and Pharrell danced across the stage, a choir danced through out the aisles.

Watch the performance below.

President Obama made a surprise appearance at the 2015 Grammys.

The leader of the free world appeared in a taped PSA, introducing It’s On Us, an organization dedicated to “ending domestic violence against women.”

He ended his speech by asking all the artists to encourage their fans to sign up at It’s OnUs.org

Fresh off her Super Bowl halftime show, Katy Perry slowed things down at the 2015 Grammys.

Perry took the stage to sing “By the Grace of God.” As her introduction, a domestic violence survivor gave an impassioned speech about love and being human.

At the end, Katy’s performance brought the house to their feet. Watch it below.

Below are the Grammy awards winners in select categories.

Album of the Year

Song of the Year

Meghan Trainor, “All About That Bass”
Sia, “Chandelier”
Taylor Swift, “Shake It Off”
Sam Smith, “Stay With Me” (WINNER)
Hozier, “Take Me to Church”

Record of the Year

Best Reggae Album
Ziggy Marley, Fly Rasta (WINNER)
Lee “Scratch” Perry, Back on the Controls
Sean Paul, Full Frequency
Shaggy, Out of Many, One Music
Sly & Robbie & Spicy Chocolate, The Reggae Power
Soja, Amid the Noise and the Haste

Best Song Written for Visual Media
Frozen, “Let It Go (WINNER)
The Lego Movie, “Everything Is Awesome!!!”
The Hobbit: The Desolation Of Smaug, “I See Fire
Her, “The Moon Song
Glen Campbell, I’ll Be Me, “I’m Not Gonna Miss You”