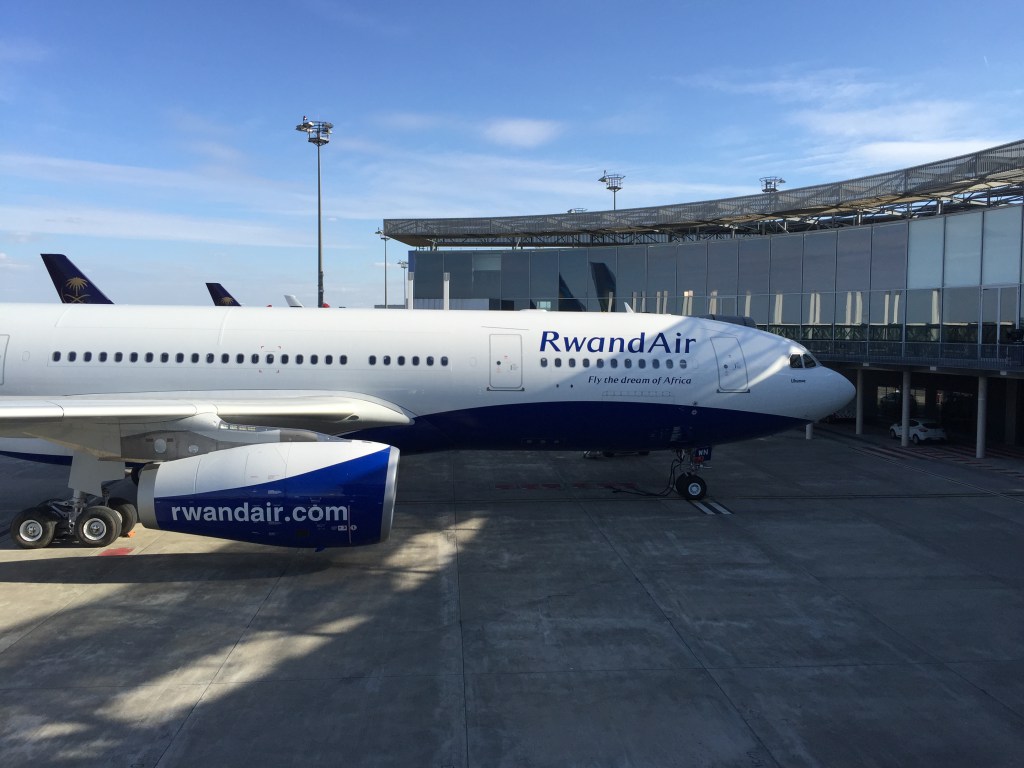 All photos courtesy of the author 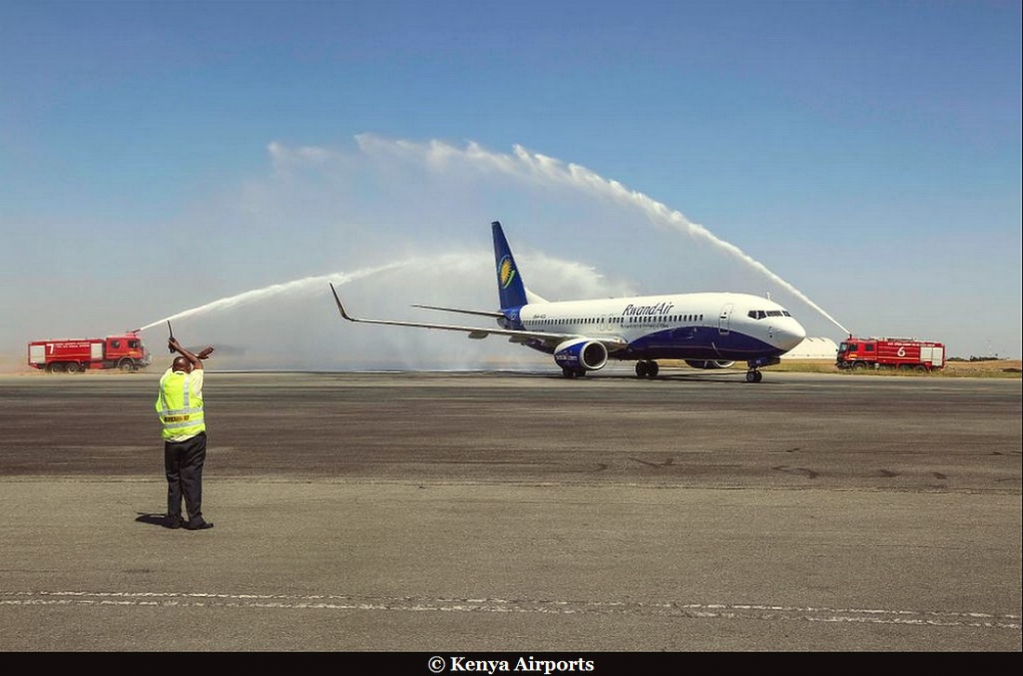 By Alex Macheras
RwandAir, the national airline and flag carrier of the Republic of Rwanda, took delivery of its first long-haul wide-body Airbus A330 aircraft in September of last year. It’s a relatively young airline, only operating flights from its base in Kigali (KGL) since 2002. After the devastating Rwandan Genocide in 1994, the government decided it needed a reliable transportation link that would firmly connect the country to the rest of the world.

As a result, RwandAir has become the first East African airline to be a launch operator of the aircraft, a move considered to be the first step of RwandAir’s expansion, along with introducing new routes to its expected long-haul network that’ll eventually include destinations like London, Shanghai, Guangzhou and Beijing — its current A330 aircraft are only flying between Kigali (KGL) and Dubai (DXB), Accra (ACC), Lagos (LOS) and Mombasa (MBA).

Alex Macheras had a chance to join the delivery flight of the first A330 from the carrier’s Airbus order, flying from Toulouse, France, to Kigali, Rwanda, with a quick stop in Entebbe, Uganda, so government officials there could take a look at their neighbor’s new plane.

This is also the first time RwandAir has ever had its livery featured on a wide-body long-haul jet. Parked and ready for the delivery flight, the aircraft proudly displays its ‘Fly the Dream of Africa’ tagline.

This particular aircraft has been named ‘Ubumwe,’ which in the local Kinyarwanda language means ‘Unity.’ 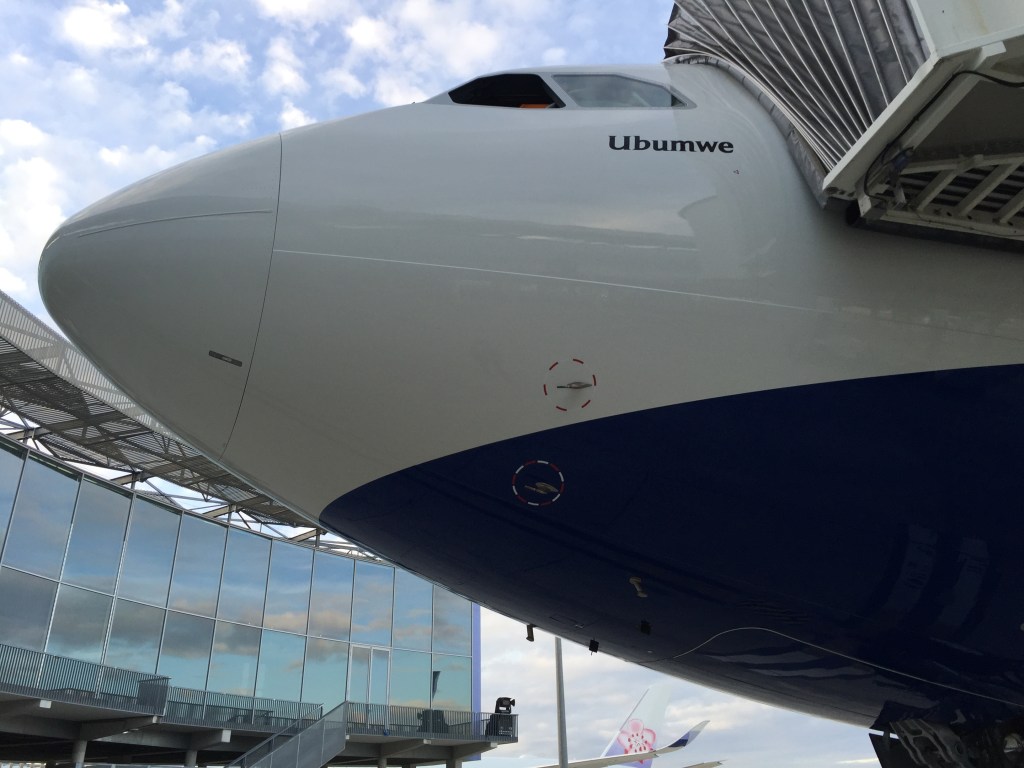 He managed to take a quick walk underneath the ‘factory fresh’ aircraft. 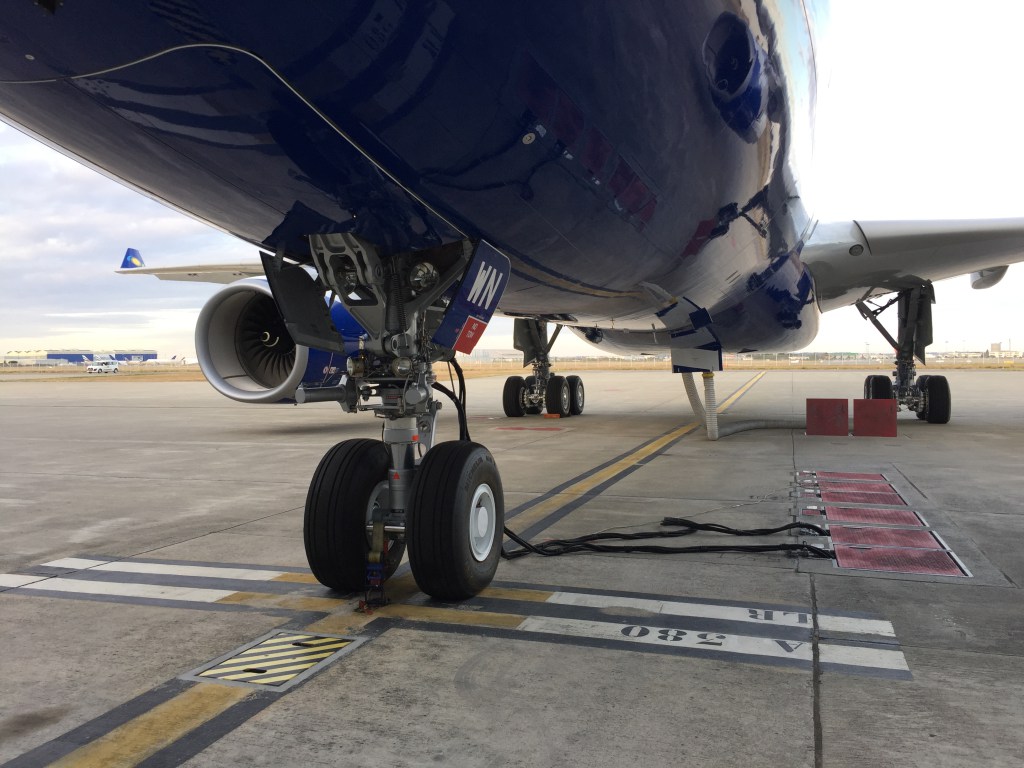 The Cockpit and Galley 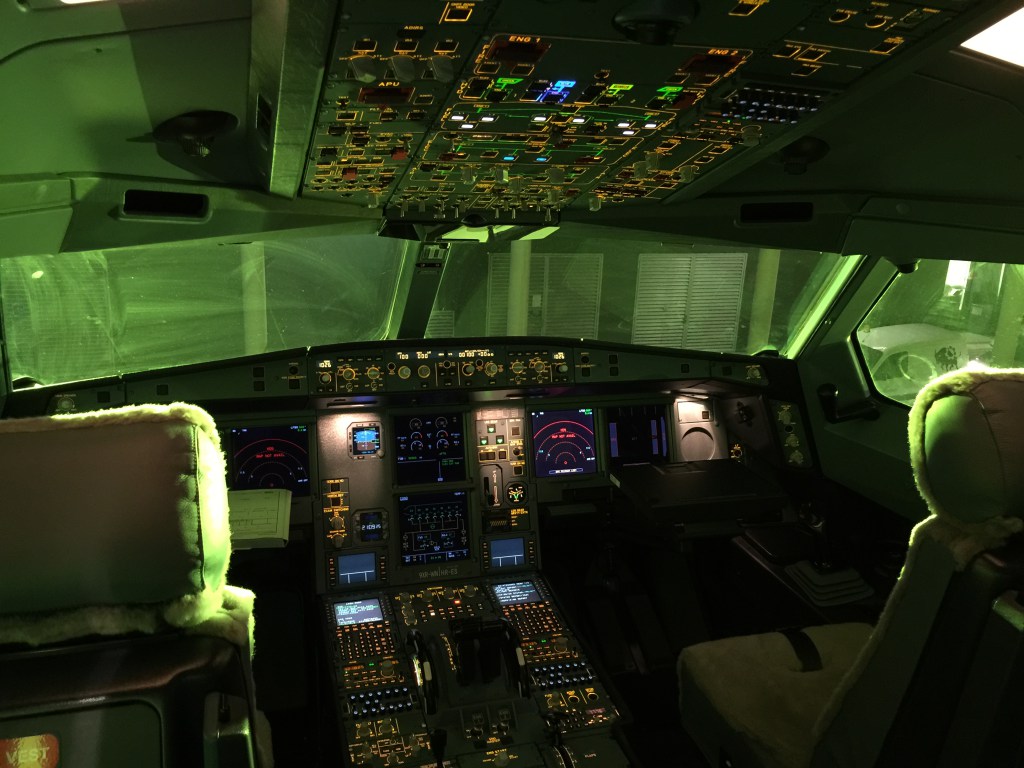 Safety placards around the aircraft are in English and French, the two official languages of Rwanda (after Kinyarwanda). 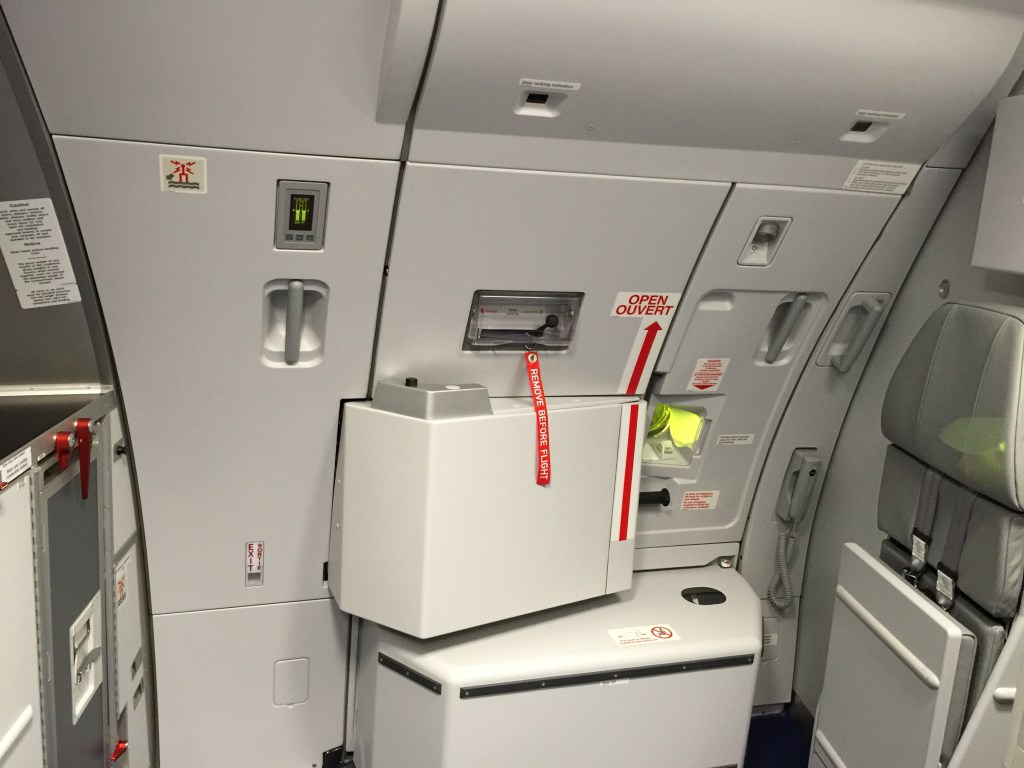 This squeaky clean galley will be the workspace of the carrier’s first long-haul cabin crew. 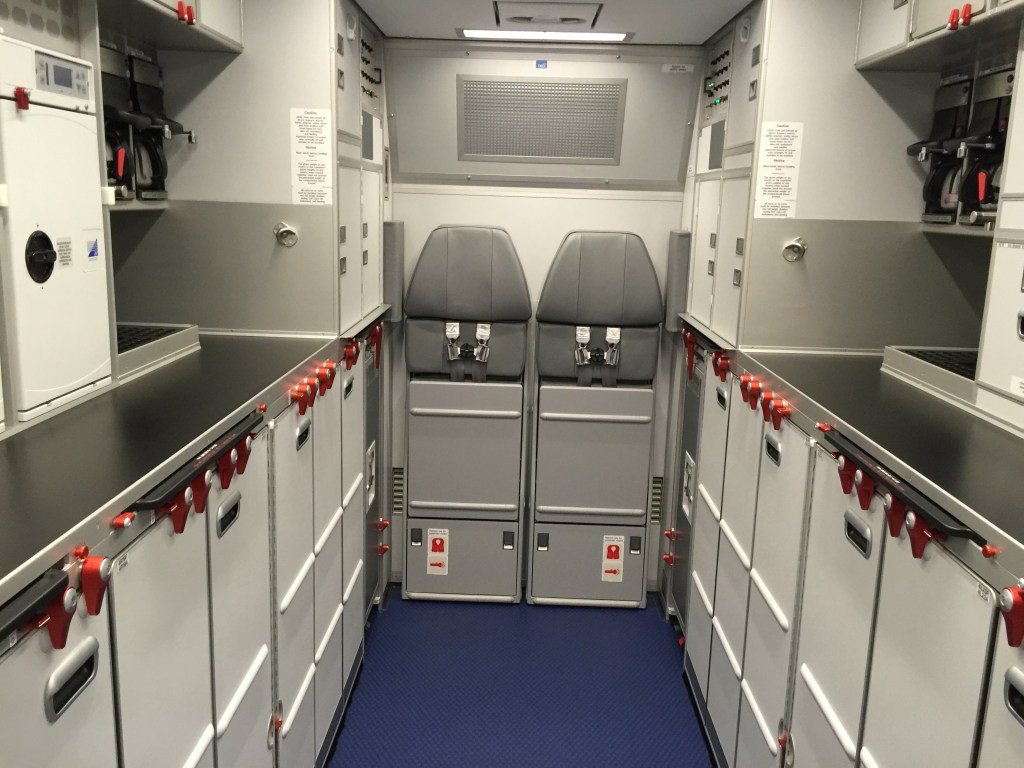 Business class is located in the aircraft’s forward cabin, made up of five rows in a 1-2-1 staggered configuration — translation: direct aisle access for all. The seats are Thompson Vantage XL, an incredibly popular, fully-flat business-class seat that’s also used by Qantas, Swiss and SAS. It’s also the seat that’ll be used in business class on Delta’s A350.

The cabin features 20 green-colored seats, each with a sand-colored leather cloth cover and a dark-toned frame and table. The Airbus trim and finish manager worked with design teams from the airline to create an interior onboard the aircraft that was true to the culture, authenticity and ‘roots’ of Rwanda. The rear walls of each cabin section feature a pattern resembling hills, as Rwanda is famously known as being the “Land of a Thousand Hills.’ In addition to this, the choice for a dark-toned seat frame and shell was designed with the image of a gorilla hugging its baby in mind, since the country is famously known for its mountain gorillas. 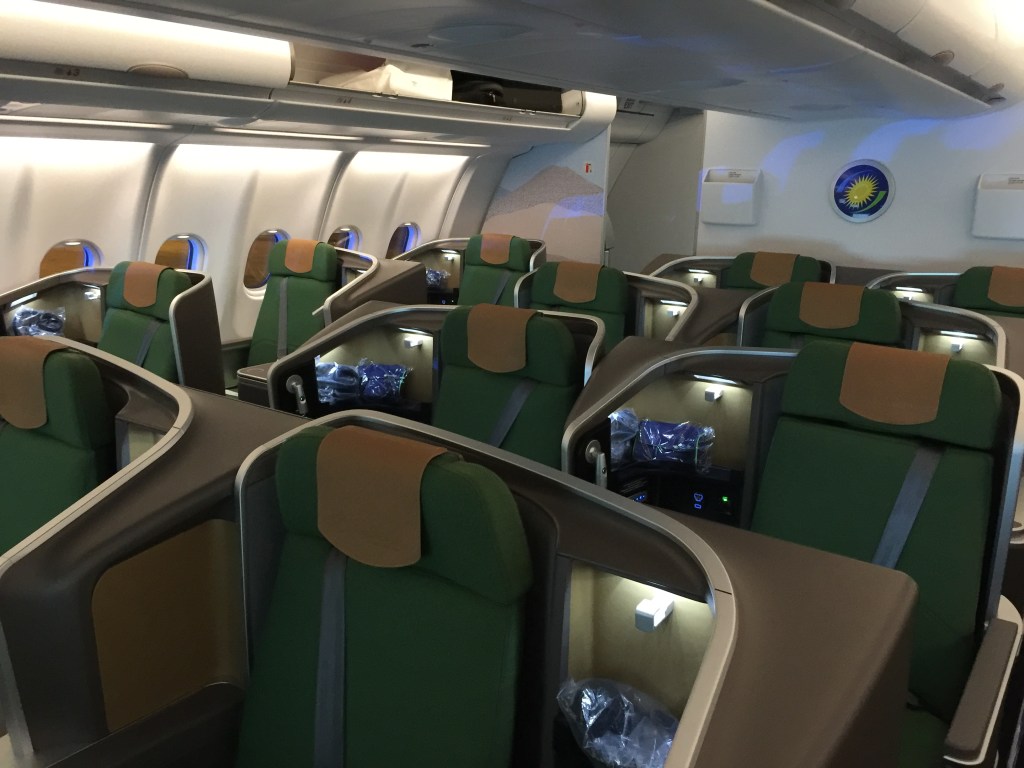 Single ‘A’ seats are perfect for solo travelers, especially seats 2A (my seat for this flight) and 4A, which are closest to the windows. 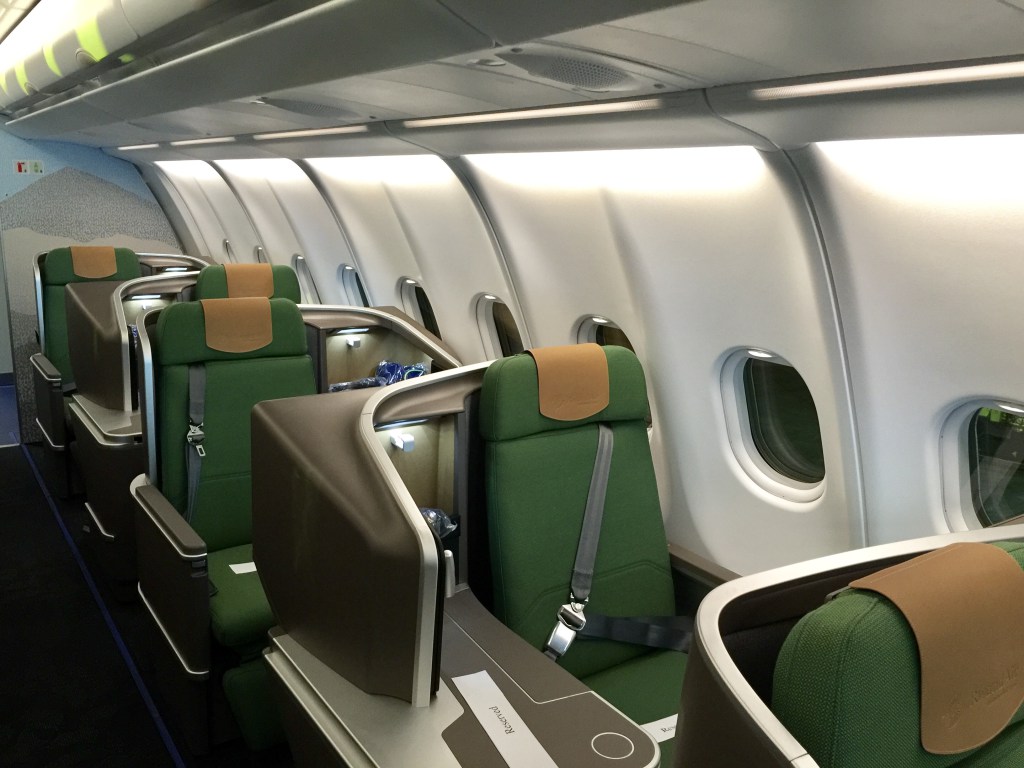 The center seats offer both the correct amount of privacy — great if you’re traveling alone — but are sociable enough for couples or friends traveling together. 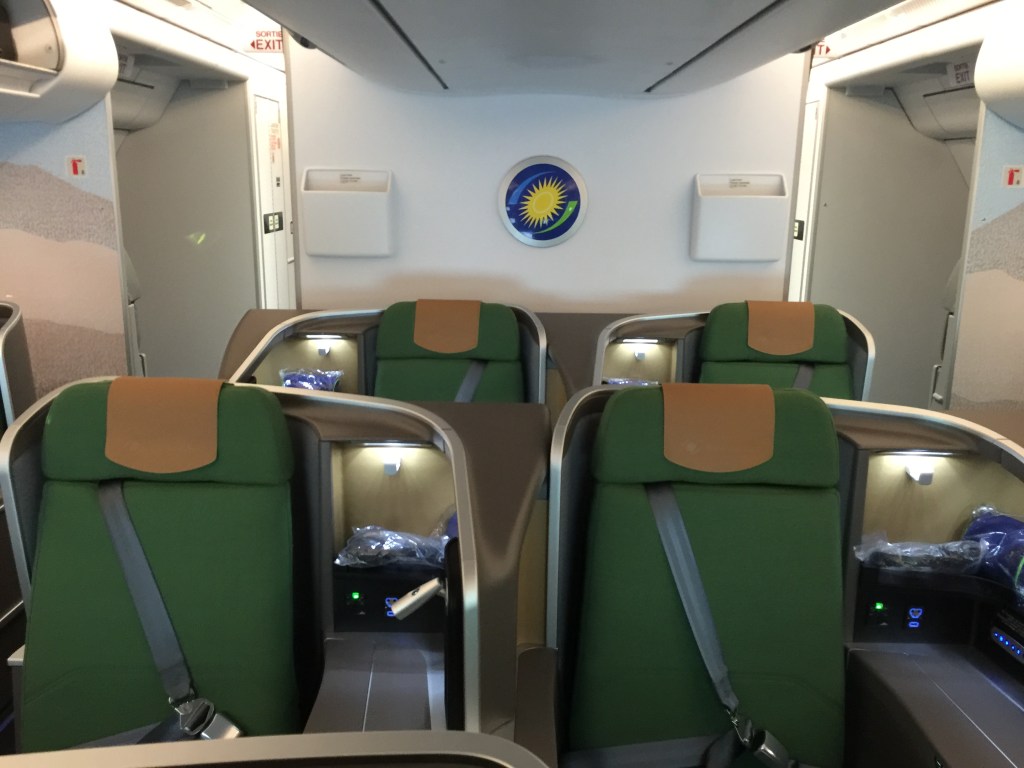 Each business-class seat is 79 inches in its lie-flat position, has 45 inches of pitch and features in-seat power via an international plug socket as well as a USB port. You’ll also have access to a small lamp and a dedicated hook to hang your headphones on.

Typical of this kind of seat, the seatbelt is over-the-shoulder — much like a car seatbelt — and connects with the usual around-the-waist belt to provide extra restraint during takeoff and landing. During turbulence, the over-the-shoulder part of the seatbelt is not necessary, therefore it can be released, meaning passengers have the option to fasten just the usual around-the-waist belt. 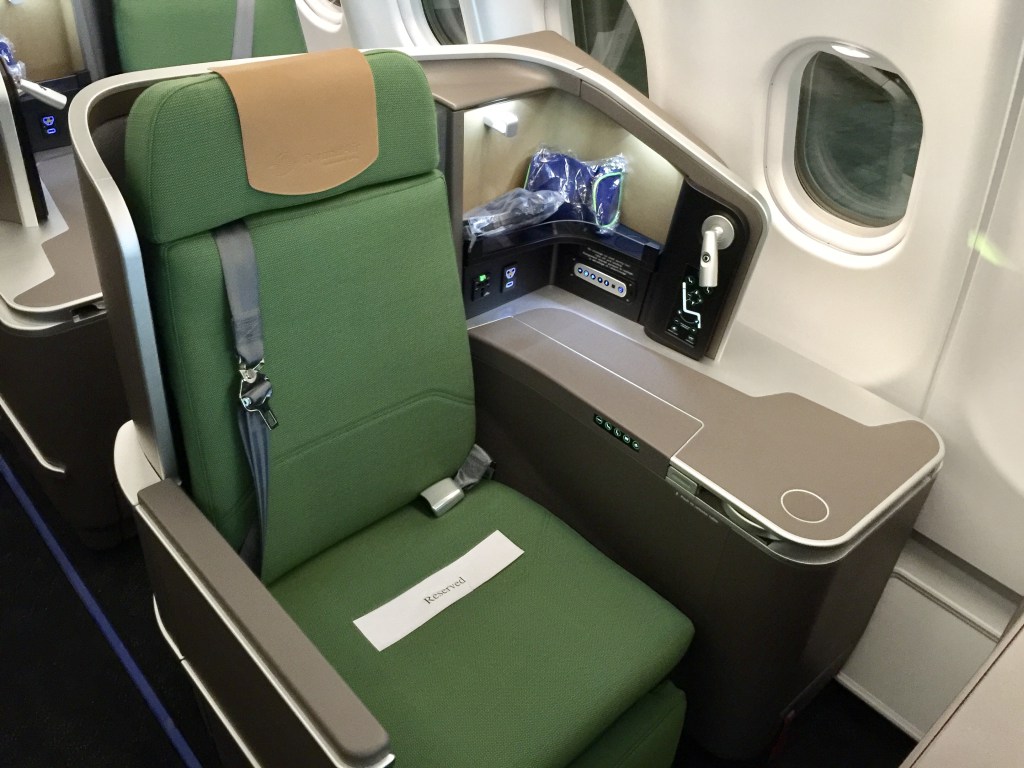 Another unique design feature aboard the aircraft was the cabin walls, which feature a pattern, a detail not many airlines include that worked really well on this particular plane. The pattern is known as ‘Imigongo,’ named for a popular Rwandan art form, and was created especially for RwandAir by the Airbus trim and finish manager. The Rwandan team onboard mentioned how passengers from the country would appreciate such familiar patterns from home. Visually, it not only looked great, but also enhanced the ‘Rwandan’ feeling in the cabin. 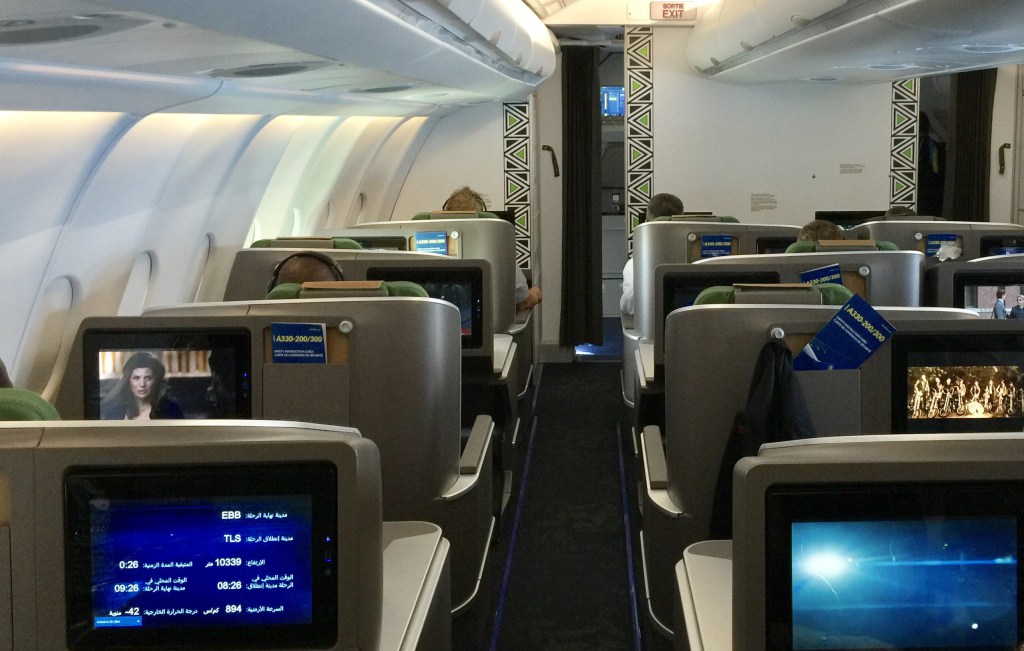 RwandAir has become the first African airline to offer a premium economy cabin, which on this aircraft is made up of three rows of 21 seats in a 2-3-2 configuration. 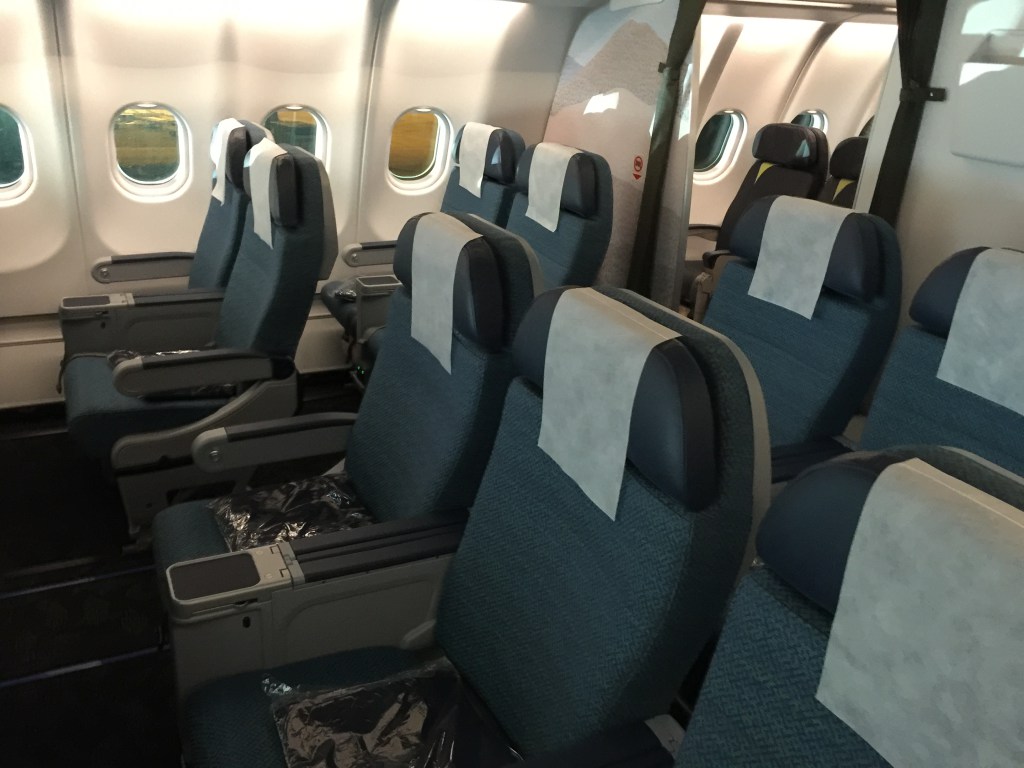 With padded seats and 38 inches of pitch, RwandAir’s premium economy cabin is going to be one of the most popular on an African airline yet. 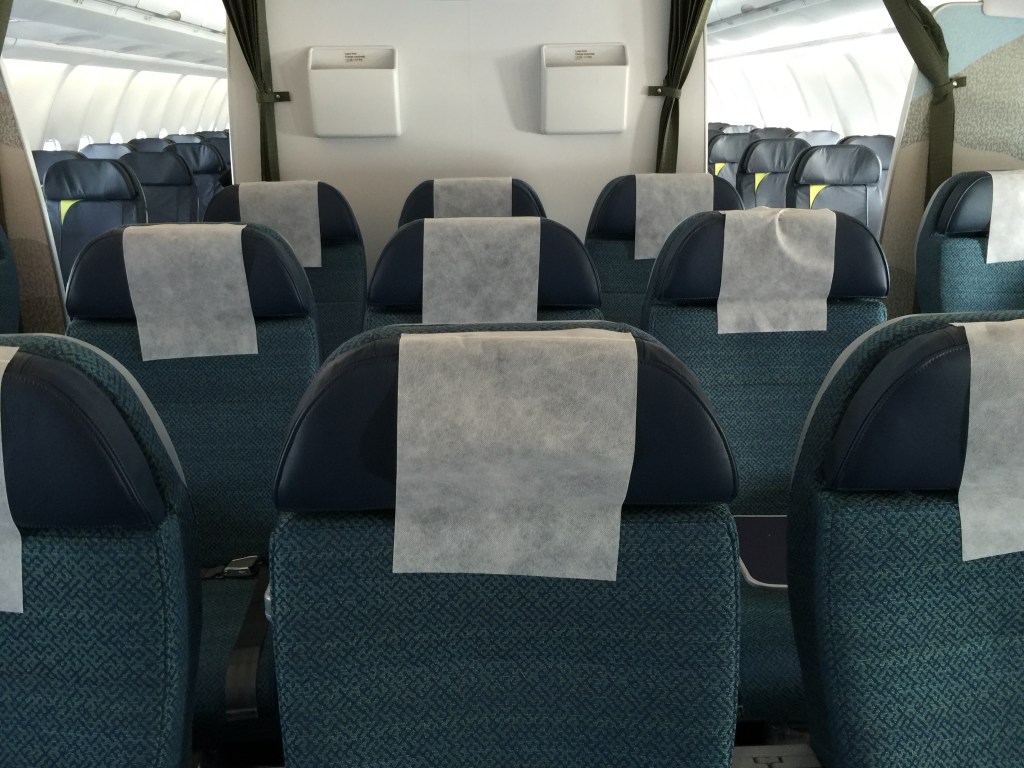 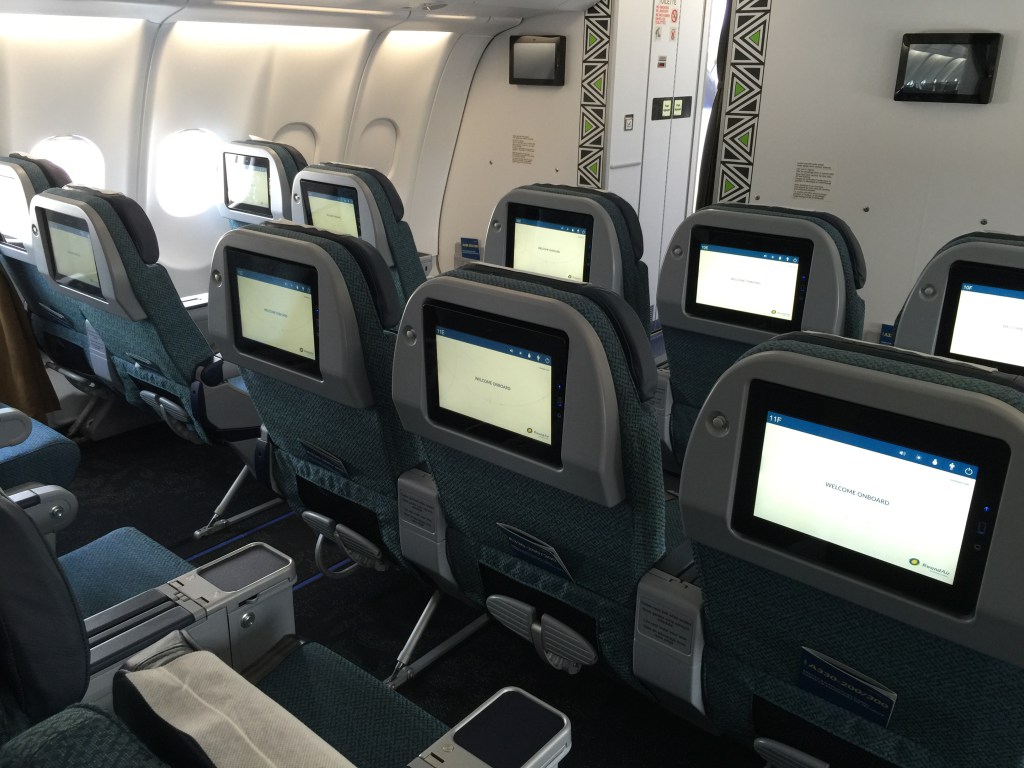 Each seat in premium economy featured a footrest. 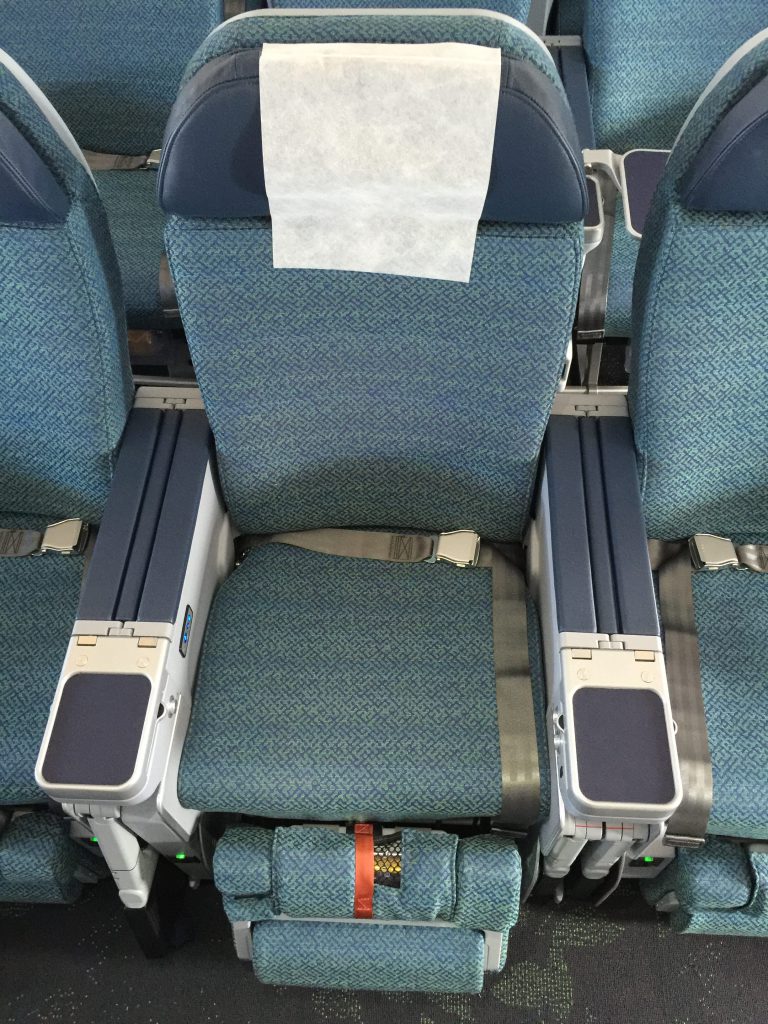 The green/blue Rwandan-inspired fabric covered most of the seat, which also featured a leather headrest and white cloth cover.

RwandAir’s A330 has 203 economy seats that take up two cabin sections. The seats are upholstered in black leather with green highlights, and laid out in a 2-4-2 configuration, which is one of the perks of the A330 aircraft as it’s better for solo travelers, couples and families. 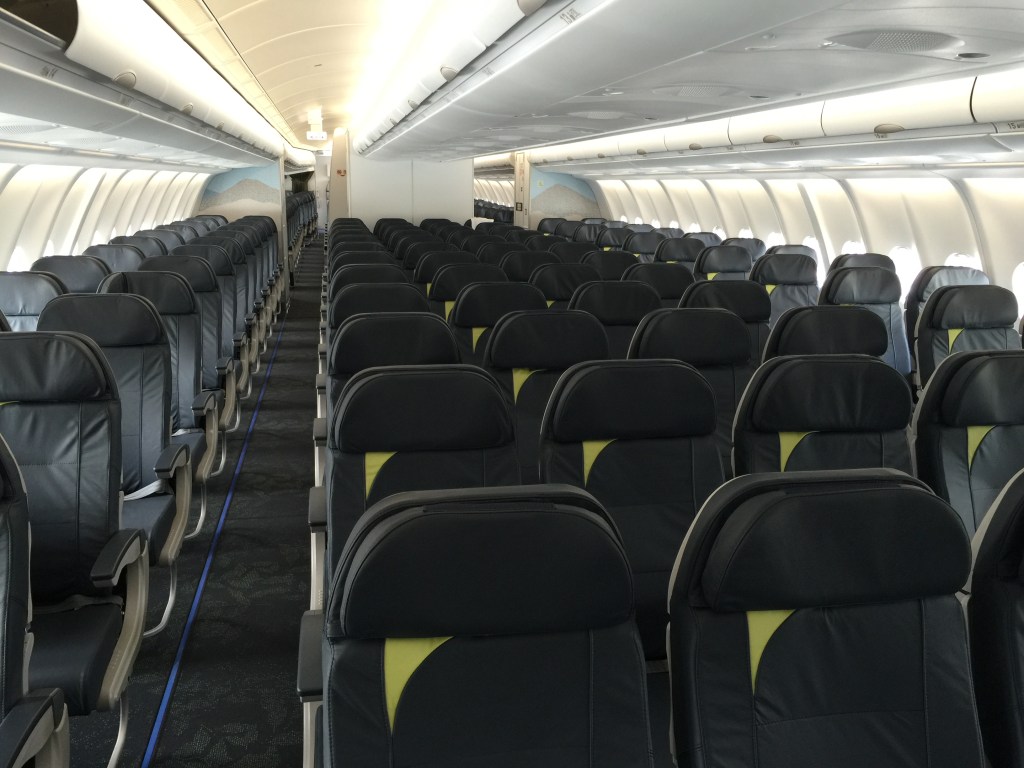 These economy seats look sleek and smart — their velcro is ready for the attachment of an antimacassar (cloth cover) — while each one’s pitch comes in at 32 inches.

Economy seats come with in-seat power via an international plug socket and USB connection, as well as a coat hook. 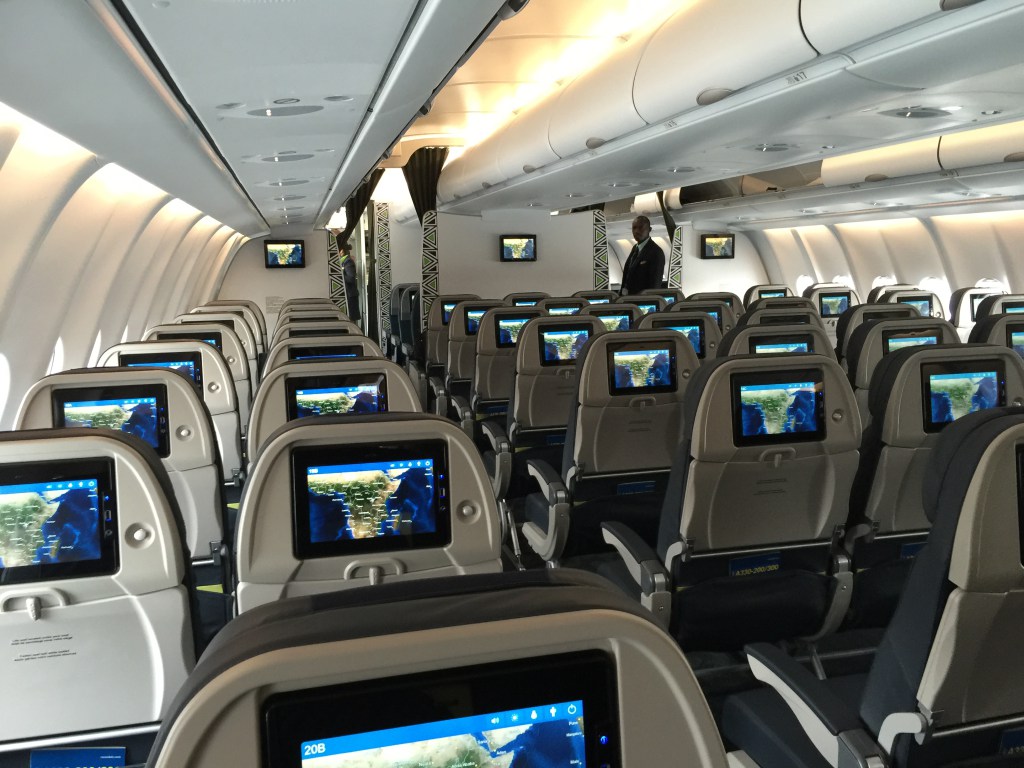 As it’s a new aircraft, frequent flyers will notice the ‘newer style’ seatbelt signs, which no longer feature an illuminated ‘no smoking sign’ but instead display information regarding when it’s safe to use electronic devices. Large screens with on-demand in-flight entertainment are offered to all economy-class passengers.

RwandAir’s A330 has certainly set the bar high for African airline offerings — essentially putting out a better business-class product than Emirates since all its seats have direct aisle access — and is now the first African airline to offer a premium economy cabin, a trend that’s becoming more and more popular worldwide.

What I like most is the way the country of Rwanda is reflected throughout all the cabins. RwandAir has used its first wide-body jet as an opportunity to create, with Airbus, a strong brand that’s fit for the A330. It’s comfortable for passengers and with an ever-expanding route network, I’m excited for the future of RwandAir, the fastest-growing airline in Africa.

Have you ever flown on RwandAir’s A330? Tell us about it, below.