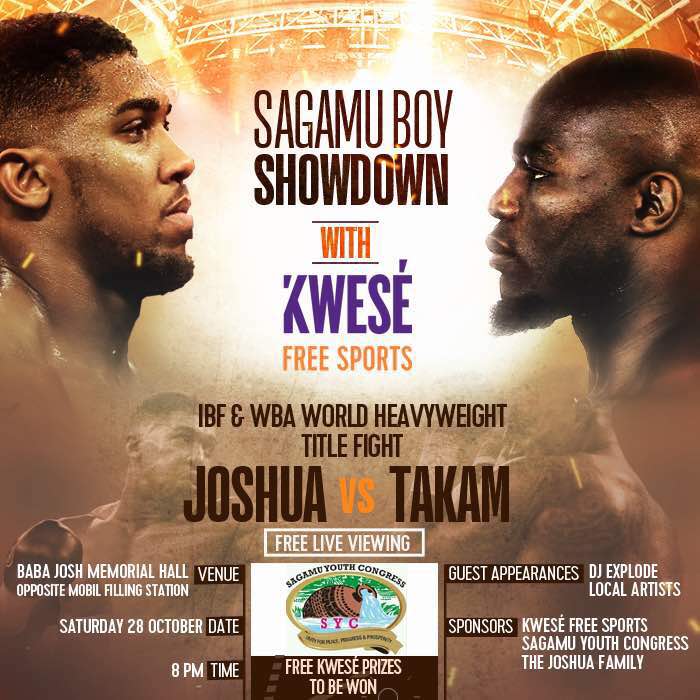 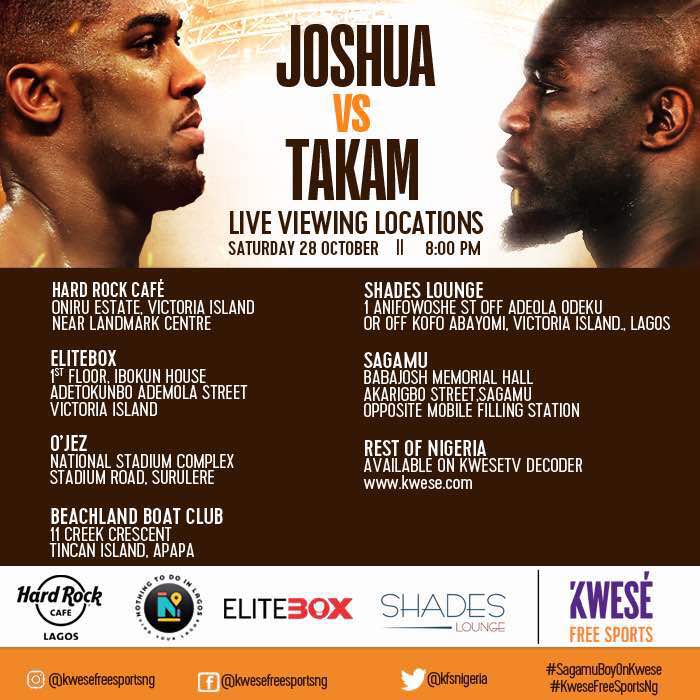 As the exclusive African broadcaster for all Anthony Joshua fights, Kwesé will broadcast his fight against Takam live on the continent’s largest pan-African free-to-air channel Kwesé Free Sports. This means sports fans across the continent have free access to enjoy this explosive fight wherever they are!

Nigerian audiences can join the estimated 80, 000 spectators expected at Cardiff’s Principality Stadium for two live screenings of the fight in Nigeria. Simulcast viewings will be held in Joshua’s ancestral hometown of Sagamu at the Baba Josh Memorial Hall, as well as at the Hard Rock Café in Lagos. The live screenings, which coincide with the Sagamu Day celebrations, are endorsed by the Sagamu Youth Congress and will have members of the Joshua clan in attendance.

The main bout is scheduled to start at 10.30pm however, doors at the Sagamu and Lagos viewing centres will open from 6pm to give boxing fans the opportunity to watch all the undercard fights. Spectators at the viewing centres will also be kept entertained by musical performances and stand-up comedy from local artists in the build up to the fight.

“We pride ourselves on broadcasting nothing but the best in international and African sporting action. We will once again provide exclusive broadcast of yet another epic Joshua showdown on our platform, as well as live screenings of the fight where we will see one of our own hopefully retain his unbeaten track record,” expressed General Manager Kwesé Free Sports Nigeria, ChiChi Nwoko.

“As the only pan-African and local sports channel in Nigeria with exclusive rights to the fight, Kwesé Free Sports will broadcast the fight on UHF 32 in Lagos or channel 732 on Free TV decoders in Jos and Abuja,” added Nwoko.

Boxing fans can also visit their nearest Kwesé branded store(s) to purchase a decoder and dish for N10,960 (inclusive of one month free subscription) to catch the fight on Kwesé Sports 1, channel 300 on Kwesé  TV bouquet.

This is Joshua’s return to the ring after his memorable win against Wladimir Klitschko in April this year. Following this impressive win, Joshua will enter the ring with 19 knockout victories under his belt and the confidence to match.

Relatively unknown in comparison, Cameroonian heavyweight and former Olympian Takam will be no easy opponent as an aggressive come-forward style of boxer known for retaining a puncher’s stance. Takam moved from relative obscurity when he went toe to toe with WBO Champion Joseph Parker well into the 12th round last year.

Although a new match up, following Kubrat Pulev’s unexpected withdrawal, both fighters are ready to put it all on the line for bragging rights and three heavyweight titles. Both opponents trace their roots to African soil, so this is one fight African boxing fans do not want to miss.

Where ever you are and whatever the preference, Kwesé has made the fight available to sports fans across the continent on multiple platforms; including free-to-air TV, satellite (pay) TV and mobile phones through the Kwese App. The broadcaster has also made provision for fans who prefer digital viewing and will broadcast the fight live on the Kwesé ESPN Facebook page: www.facebook.com/kwesesports.