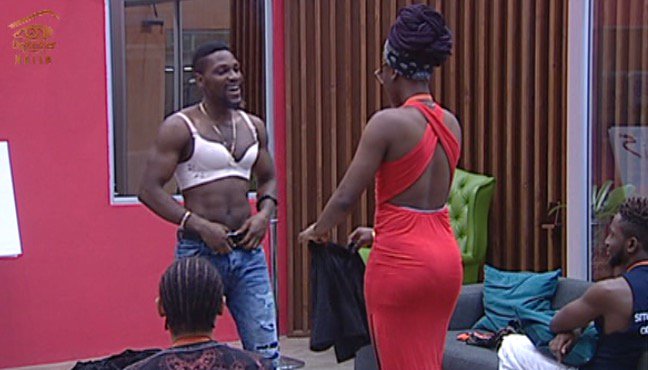 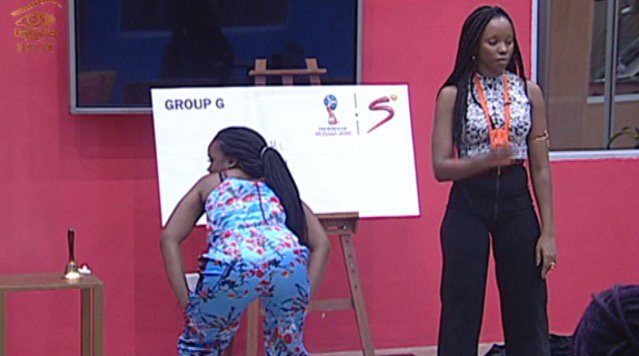 After a sleepy start to the day, things could not have gotten more fun and filled with excitement than they did through the two SuperSport quizzes. It was a dramatic turn of events that rippled through every emotion from joy and hysteria to tears and anger.

Each times the Housemates failed to get their answers right during the quiz, they would have to take on a punishment. These punishments ranged from singing to rapping all the way through to stripping and Miracle and Tobi were happy to oblige. Toracle were on absolute fire, first Miracle stripped down to his underwear and strutted his stuff, then Tobi did a performance whereby he took his shirt off and gave Anto a massage. Later Tobi even went so far as to put on a skirt and bra in jest which really made everyone laugh. The two House besties were definitely the stars of the show this afternoon. It must be all the practice from the strip dice game.

While the guys were given strip punishments, the ladies were requested to twerk and to dance. Anto and Khloe obliged as did BamBam and Cee-C but Alex straight out refused. She did perform a few dance moves for the House and did a funny imitation of everyone’s dance moves in the House which was super entreating for everyone.

BamBam is obviously feeling very sensitive since her Nomination because as the Task ended she began crying, saying that she had been avoided during the Task. Khloe got involved and said that her tears were not real, after that, literal tears began to flow. However, word on the street is that it was a prank BamBam planned to play on Miracle – Were their some truth in those tears though? Miracle and Khloe then had a huge argument and Khloe told Miracle that he was picking on her, she stormed off visibly upset but after some mediating from Nina, things were slightly rectified.

Cee-C has become a ghost today, from disappearing for hours this morning to barely engaging in the Task today. She is completely different to the Cee-C we all know. Maybe the combative nature of what has been happening in the House is getting to her or could it be the fact that Tobi is not giving her a lot of attention. Either way something is definitely up.

What was your favourite moment of the Task today?

Bambam, Cee-C, Nina and Teddy A are up for Eviction. Vote for your favourite Housemate here or via SMS. Voting closes on Thursday 29 March at 21:00 WAT.