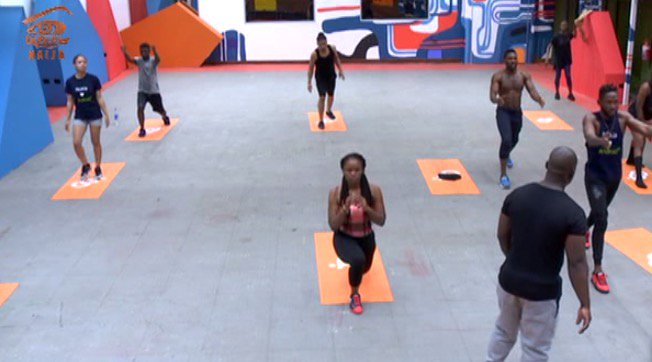 This week’s theme revolves around home sweet home, and as if they were at home Housemates have received a Yes Task. Each one will have to open a card daily and comply with its instructions as the Task difficulties increase over the days. Knowing that the Task will affect their Wager, Housemates lent themselves to some hilarious feats.

To complete her share of the Task, Head of House Khloe had to apply make-up on her face as requested. Later in the evening, Cee-C who had found another card elected Rico for the Task of wearing his clothes inside out. It was quite comical but he was not the only one as Alex’s instructions to walk backwards for the rest of the day broke the House into laughter. When Anto’s turn came she had to execute a dance strictly for the guys, which by the time she was finished left the lounge spinning. Yet Miracle’s card instructions cracked Housemates ribs as he had to confess a major secret to a plant.

The Diary Session left Housemates hungry and they gladly refuelled in the kitchen. Since Biggie always looks after his guests, Tobi was delighted to run to the store room from where they found bottles of liquors to keep the night going. Since Teddy A and his bartender skills had exited, Miracle was left with pouring drinks into his peers’ glasses. Shortly after together with Tobi they plunged into the steamy Jacuzzi and were soon joined by Nina, Anto, Alex and Lolu. Khloe also joined in the fun but remained outside the tub, while Cee-C had called it an early night and was in bed.

Earlier in the day a fight involving Khloe and Anto about the number of portions the Head of House was cooking quickly turned into an uncontrollable situation when other Housemates got involved.

An advice from Tobi didn’t sit well with Khloe and she got agitated even more. The issue was interrupted by the game of cards which for most of the day it remained that way.

However, the issue was brought back to life when Khloe and Miracle revisited it. This time Miracle as trying to make her understand from his point of view but Khloe was hearing none of it. The conversation went on with Khloe speaking almost ninety percent of the time, but eventually they moved on from the issue.

Alex, Cee-C, Lolu, Nina, Miracle and Rico Swavey are up for Eviction. Vote for your favourite Housemate here or via SMS. Voting closes on Thursday 5 April at 21:00 WAT.