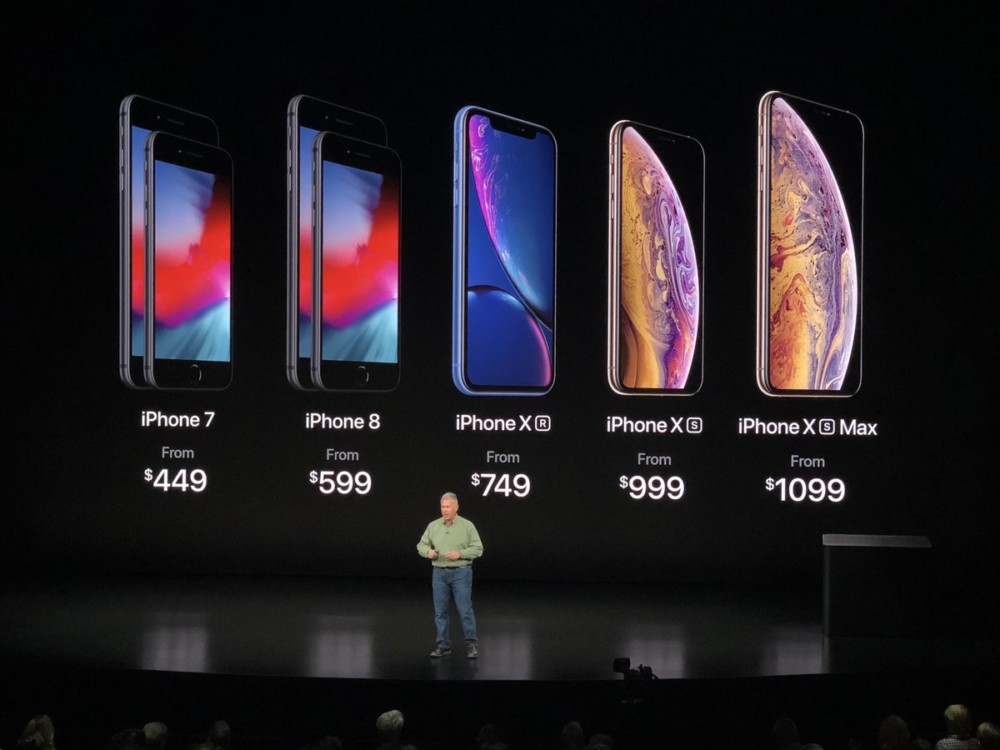 Apple officially unveiled its 2018 flagship phones today: the 5.8-inch iPhone Xs and 6.5-inch iPhone Xs Max. Cosmetically, the devices are virtually identical to 2017’s flagship iPhone X, but include the collection of external and internal tweaks that have come to characterize Apple’s “s” models.

As the direct sequel to the iPhone X, the iPhone Xs retains its predecessor’s marquee features: a stainless steel frame and 5.8-inch, edge-to-edge Super Retina display, interrupted by a depth-sensing Face ID camera inside a black “notch.” Dimensions are 5.65 inches by 2.79 inches by 0.30 inches, with a 6.24-ounce weight. But the Xs now comes in three colors rather than two, adding the option of a golden frame and matching back.

The new version promises the best cover glass and liquid resistance of any iPhone, designed to protect a screen that’s now HDR10 and Dolby Vision-certified. In addition to testing with other liquids, certified IP68 water resistance promises two-meter depth submersion for up to 30 minutes.

As expected, Apple also introduced a larger version of the iPhone Xs called the iPhone Xs Max. While the iPhone Xs packs a 5.8-inch OLED screen into a footprint roughly the size of its former 4.7-inch iPhone 6, 6s, 7, and 8 models, the Max version includes a 6.5-inch screen within a chassis sized like the 5.5-inch-screened iPhone 6 Plus and its successors. It measures 6.2 inches tall by 3.05 inches wide by 0.3 inch deep, and weighs 7.34 ounces. 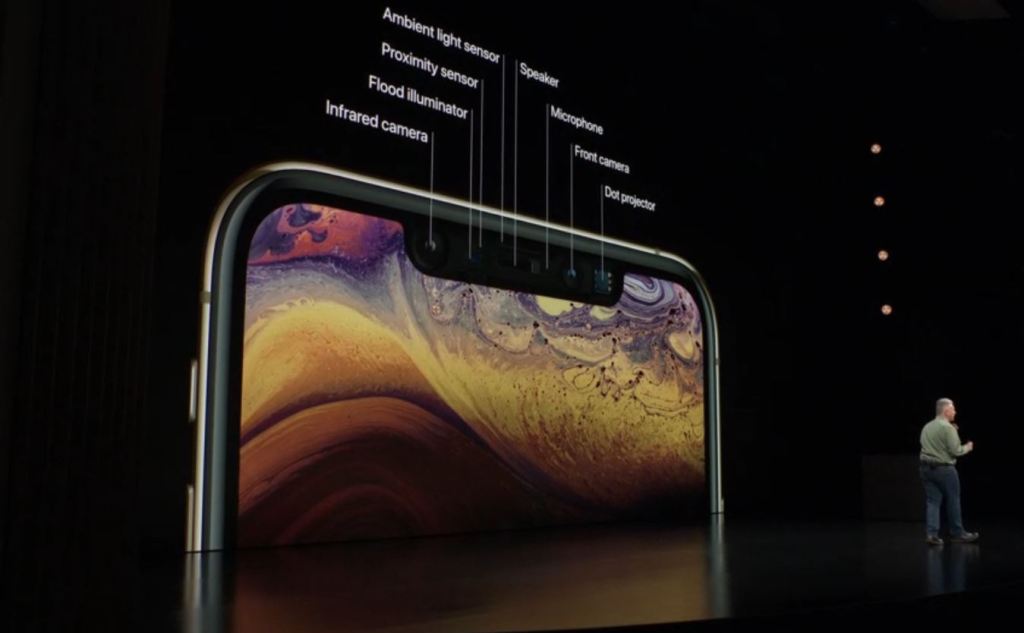 Both because it’s larger and uses OLED technology with more pixels per inch than before, the new screen features a higher resolution than iPhone Plus models. In horizontal orientation, it can split into two panes — a feature that was included in all 5.5-inch Plus phones, but notably omitted from the 5.8-inch iPhone X.

The iPhone Xs has a 2436 by 1125 screen, while the Xs Max’s 6.5-inch screen runs at 2688 by 1242, the largest and highest resolution ever in an iPhone. Apple explained that it’s being called “Max” because it’s bigger than the iPhones’ past Plus-sized displays. Apple also says that the new phones have wider stereo sound fields than before. 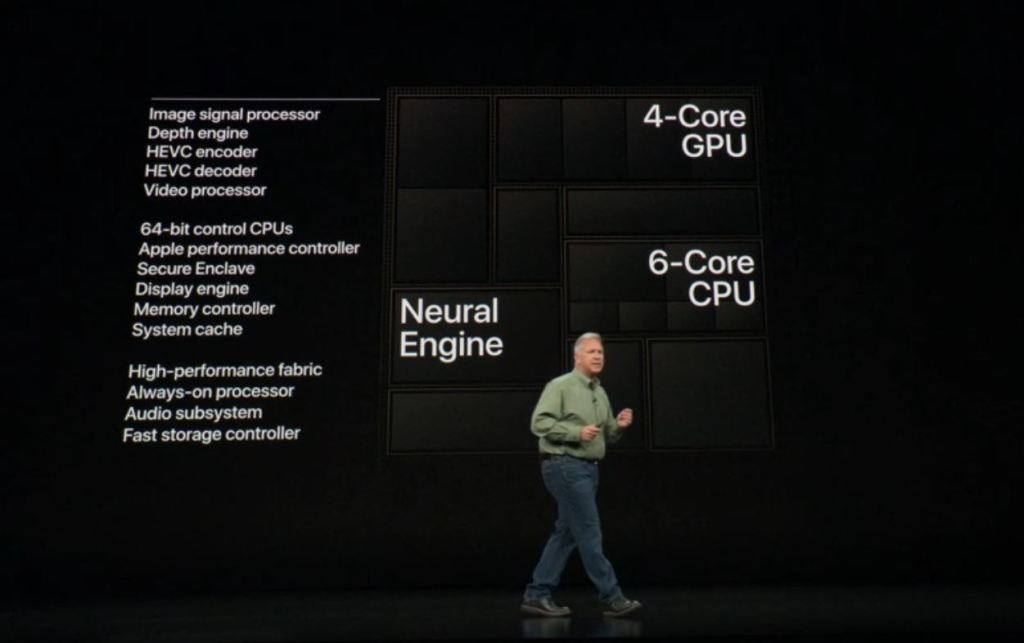 A second-generation Face ID front-facing camera system is promised to be faster than last year’s, aided with faster algorithms and a faster secure enclave. The front camera has been updated with a faster sensor, and the lens is at f/2.2 speed. Additionally, Apple says the iPhone Xs rear cameras have been calibrated for AR, including low-light and 60fps support. It’s all powered by Apple’s new A12 Bionic processor — the first 7-nanometer chip to be commercially available, with 6.9 billion transistors.

The A12 Bionic is a 6-core CPU with 2 performance cores deliver up to 15 percent speeds and 40 percent lower power, with 4 efficiency cores running at up to 50 percent lower power. Apple is touting a 50 percent GPU performance improvement over the A11 Bionic, as well. It also has a second-generation Neural Engine, and can process 5 trillion operations per second, up from 600 billion the year before; this is said to unlock the potential of machine learning for the iPhones. 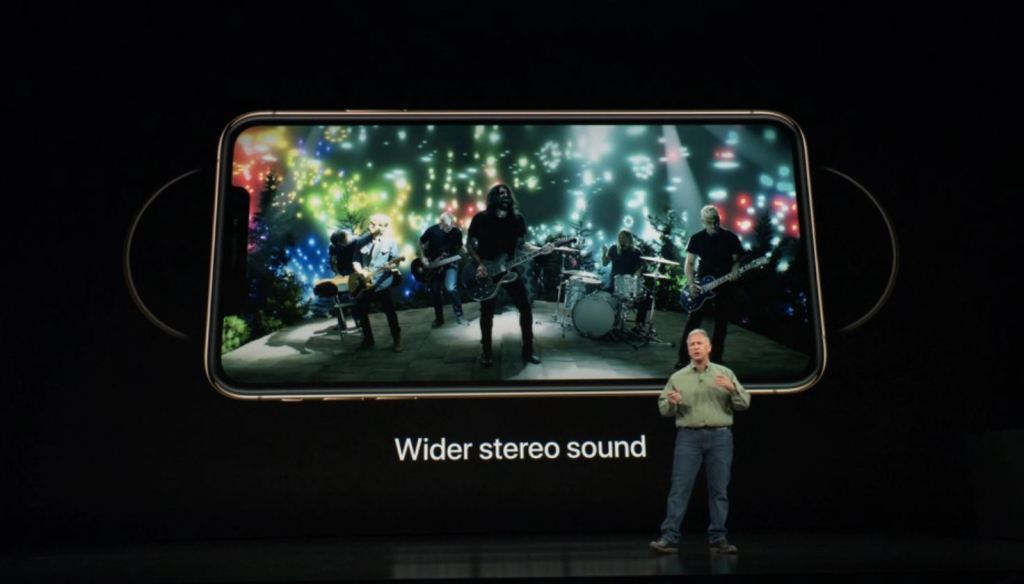 As expected, the Xs models’ dual-lensed rear camera system has been improved over the iPhone X. The rear cameras are 12-Megapixel with new sensors and an improved true tone flash; the wide-angle camera is f/1.8, with an all-new sensor that’s deeper for improved photos, while the telephoto camera is f/2.4 for 2X optical zoom. This time, the processor is able to better segment hair for depth-mapping in portrait mode — a major problem in prior iPhones with the feature — and can do better at red-eye reduction.

Smart HDR is an improved version of HDR that can capture shadow, highlight, and midrange details, with superb color range — all visible on the HDR-supported screens of the new iPhones. Improved bokeh (background blurring) has been added to the portrait mode, mimicking professional DSLRs, with a slider that lets users adjust the simulated depth of field from f/1.4 to f/16 in realtime.

Battery life has taken a small step forward. The iPhone X promised “up to 21 hours” of talk time, 12 hours of internet use, and 13 hours of wireless video playback time, with the ability to recharge 50 percent of its battery in 30 minutes. On stage, Apple promised 30 minutes more of Xs battery life, and up to 90 minutes longer than the X on the Max model, which uses the largest battery yet found in an iPhone. 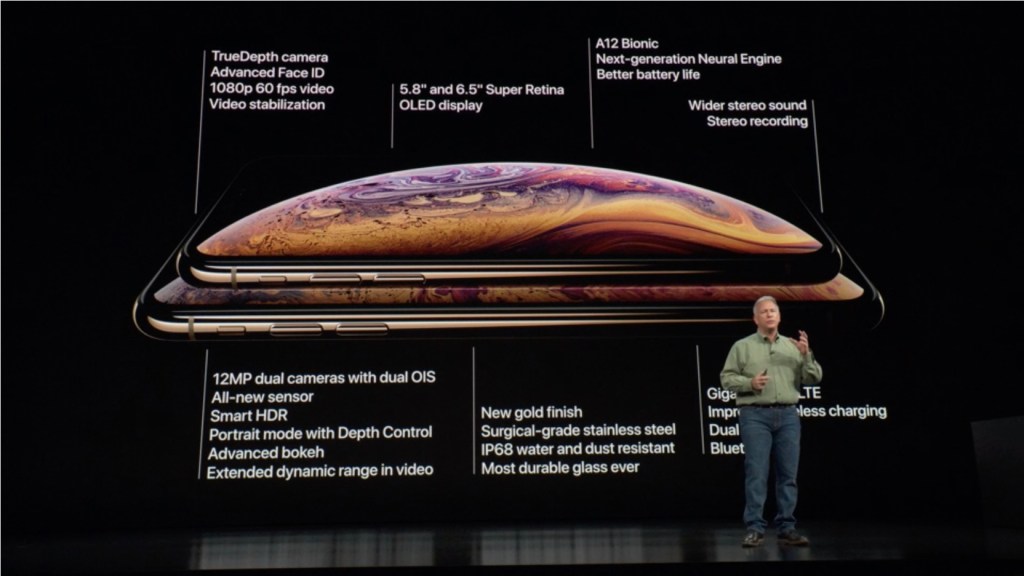 On the cellular front, both phones are getting dual SIM capabilities, using Dual SIM Dual Standby mode, so both phone numbers can be awaiting a call — most models will use eSIM technology for one of the SIMs, but in China, dual physical SIMs will be employed to comply with Chinese law. The iPhone Xs also adds support for gigabit-class LTE and Bluetooth 5.0.

The iPhone Xs and iPhone Xs Max will both be available in 64GB, 256GB, and 512GB storage configurations, adding an upper third tier to the iPhone X, which was available only in 64GB and 256GB models.

Alongside the new iPhones, Apple is introducing matching silicone cases and two different leather cases (case and folio), each in multiple colors. AppleCare will carry the same price for both iPhone Xs models, and come in two versions — basic AppleCare, and AppleCare “with theft and loss” coverage.