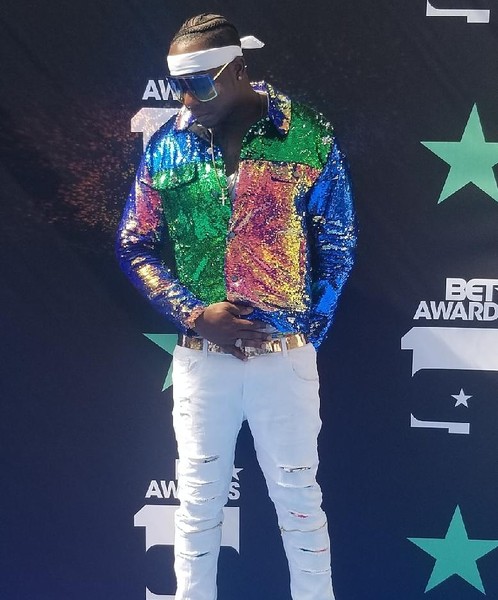 The BET Awards red carpet now the “Blue Carpet” knows what excellence looks like. Over the past 19 years, the award show has been graced with some iconic moments from Destiny’s Child in the finest House of Deréon fashions to Janelle Monáe’s rainbow-colored fantasy. The stars went full glam on the carpet this year ahead of the show at Microsoft Theater in downtown Los Angeles on Sunday night, June 24th 2019, dripping in jaw-dropping looks fit for a runway. Hosted by “Girl’s Trip” and “Black Monday” star Regina Hall for the first time, this year’s ceremony is set to be one for the ages with Cardi B leading the nominations into the ceremony with seven nods, including female hip-hop artist and album of the year. One thing we noticed was when P-kash walked the Blue carpet we seen a ring.

After taking photos and walking into the Microsoft Theater , he even sits down and proudly shows a ring and we still are yet to figure out if the sassy, mc is married or if it was just for show. P-kash has made remarks on Facebook and twitter about a bad EX’ but never revealed the sources. He recently made a post saying he’s SINGLE again’

Sources say, P-kash walked around the bet awards with an expensive looking blinged out wending ring that matched his Givenchy colorful jacket.

According to his Instagram @pkashent, He was in Givenchy, Versace and a couple big name brands for this year’s 2019 BET awards. Check out the pictures below and let us know what you think. Go to Bet.com and check out more on 2019 BET Awards.