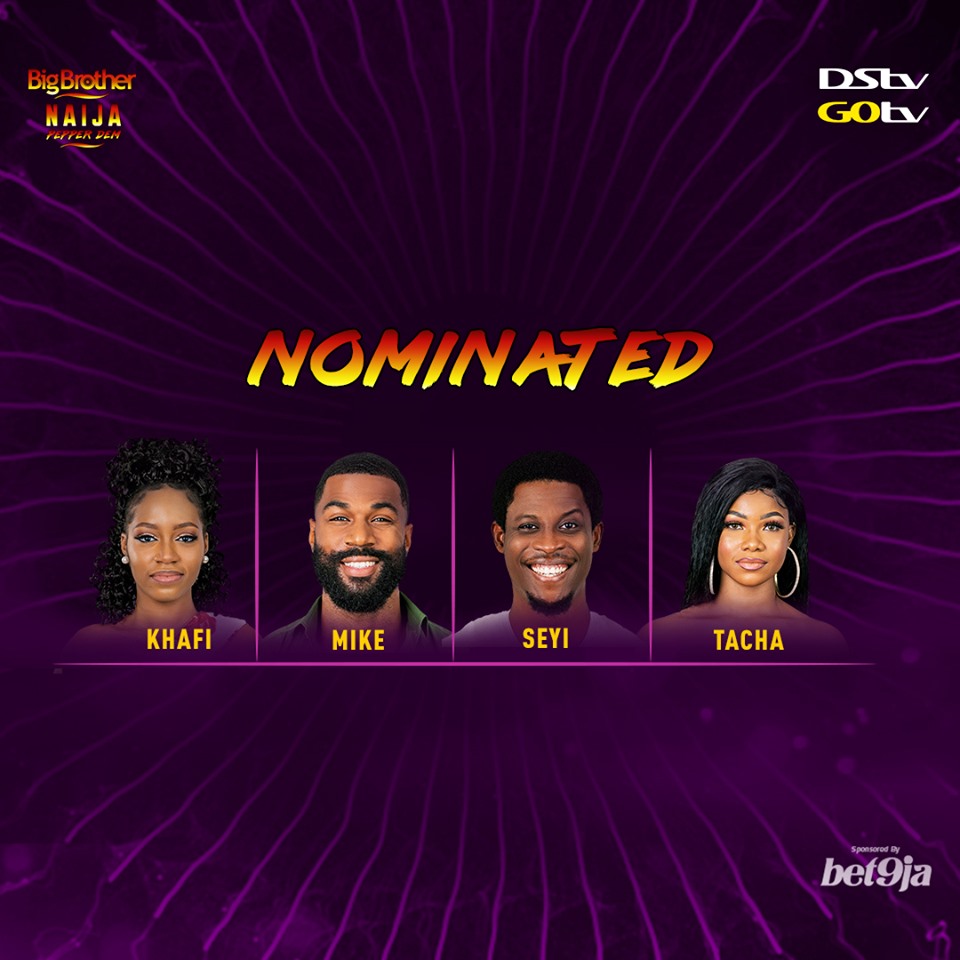 It’s another Nomination Monday and the Pepper Dem Gang did not slack to show us that the Game is getting intense. Tonight, most of their Nominations seemed on a mission of revenge.

Seyi went into the Diary Room first where he Nominated Khafi and Tacha. Considering what has transpired between the trio, his Nomination did not come as a surprise. But we wonder why Diane Nominated Omashola and Mike. But then we remember her telling Biggie how competitive he is.

As for Frodd, his Nomination of Ike was understandable. During his VPH moment, he had replaced him with Venita and that scars still hurt the resident slow tiger.  As for his Nomination of Mike, well, that’s to tell us the Game is getting intense.

Quite naturally, Tacha Nominated Seyi and Mike. Talk about serving it hot to each other. And the resident sugar Daddy had no option but to reciprocate. Call it tit for tat. For Mike, Nominating Omashola and Tacha was quite normal, both have got means to keep themselves in the House. Isn’t that what the cruise man has always told us?

When it was Mercy’s turn, she Nominated Omashola and Khafi. Well, she has her reasons! But when Elozonam chose Frodd and Tacha, we were like oh yes, the guy wanted to live up to his promise to Ebuka on the Live Show yesterday. Also, he and Frodd are not on good terms.

When it was Omashola’s time to use his Veto Power, the look on his face showed how very disturbing it was to bear the VPH badge. His displeasure was so obvious that besides the streaks of sweat that shone on his body, he also had to be reminded by Biggie he had 10 seconds to decide. In a confused state, the resident Warri guy had to choose Seyi. From the way he let out a scream after the decision, it was clear that he was not proud of it. In short, he stormed out of the room immediately wondering about what he had just done. It took Biggie’s summon before he returned to the Lounge where he later confirmed his Nomination.

Up For Eviction Are!

After Omashola’s Safe and Replace Power, we now have Khafi, Mike, Seyi and Tacha Nominated for possible Eviction on Sunday. Hmm, with this set of Housemates Nominated, we can’t wait to see what happens at the Live Eviction Show on Sunday.

While tonight’s Nomination might look like the most dramatic ever, we feel (in an American accent) we ain’t seen nothing yet. That’s why we can’t wait for Mondays.

#BBNaija Season 4 Day 71: The Pepper Dem Gang are anticipating an exciting week ahead with Cindy as the Head of House
Idols SA Season 15: After a record-shattering, 20.7 MILLION votes we finally have a Top 10!
Advertisement