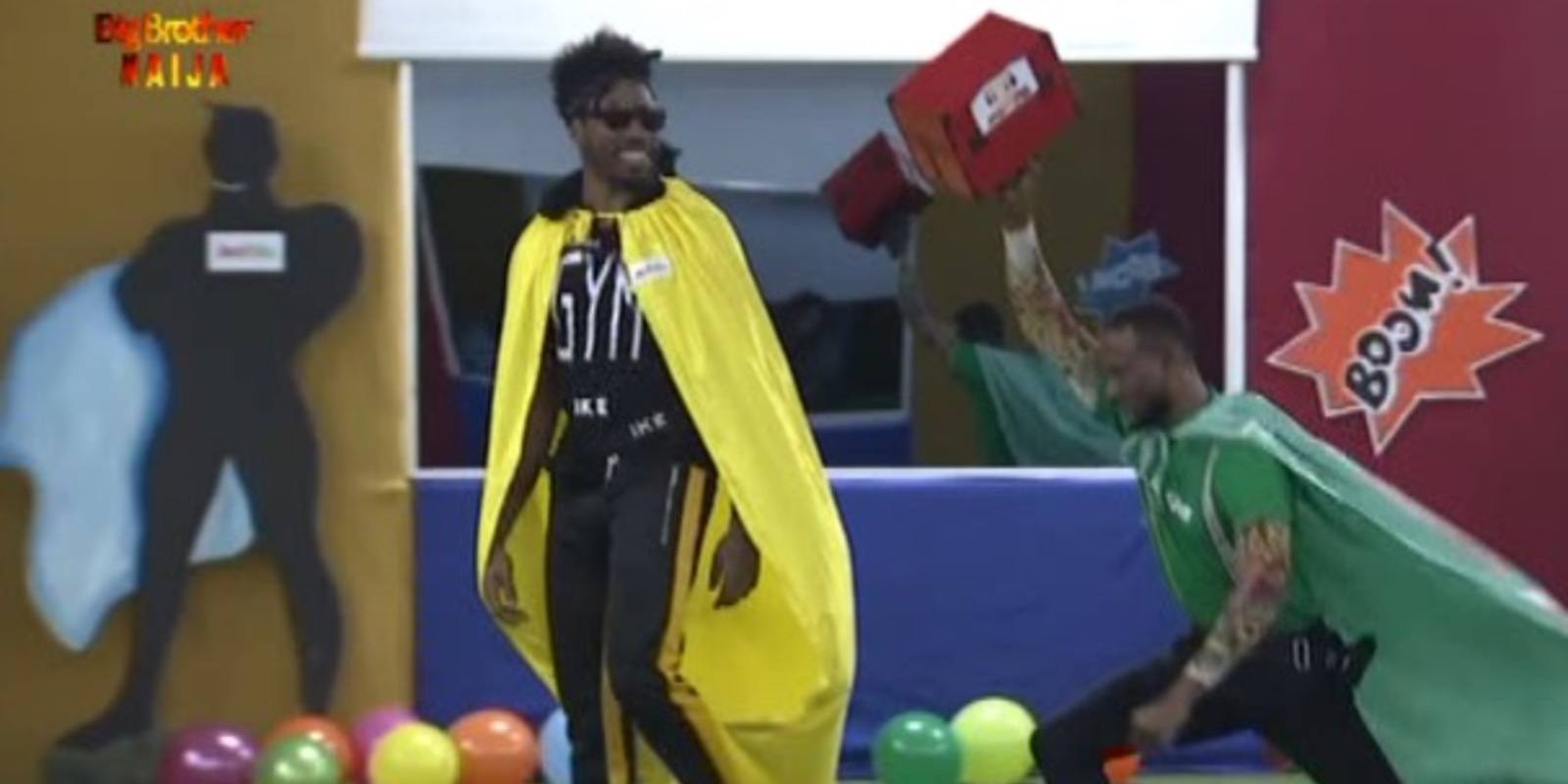 Clad in their capes (which reminded us of Superman), the Pepper Dem Housemates played a game of superheroes and villains which saw Ike become the superhero of tonight’s Arena Game. Omashola wasn’t left out as he came second, leaving the Arena with 200 Bet9ja Coins.

The sudden frenzy to use the shopping cart didn’t go unnoticed by Biggie as it has been reopened for business. Now, Housemates can freely any item from the cart and even items not listed on the cart. There was a subtle restriction attached to this though. The Housemates were to stick to ordering simple things. Before Frodd starts to jubilate, Big Brother has removed certain items from the table. Immunity, Head of House and Veto Power are no longer available. Well, the days of grace are clearly gone.

With a straw provided, the Housemates were to stack up seven bolts to build a tower. In doing this, they must ensure that their fingers do not cross the line on the straw at any time. Failure to keep to this instruction will attract a penalty. That was what happened to Seyi, Elozonam, Frodd, Diane, Mike and Omashola as they got an additional 30 seconds added to their time for allowing their fingers to cross the marked line on the straw.

What is a superhero without flight or speed?

For this challenge, the Housemates must first blow up a balloon then use a bit of tape to stick the balloon to a small pipe on a string. Very simple right? Let’s see, with the right volume of air the balloon is expected to fly to the other end of the string. What happens if it doesn’t? The Housemate gets penalized.

The third challenge they had to overcome was the mystery superhero on a seat. Sitting on a simple office chair, the Housemates had to move from one end of the line to the other end of the zig-zag line. They had fun on this one as they all swivelled on the zig-zag line.

Equipped with a power hammer, the Pepper Dem Gang all became Thor as they aimed for a web box. They had to stand on a marked spot to make their throw. Well, they all found that it wasn’t an easy feat to make a successful throw as some of them had to repeat the challenge a few times.

As the Pepper Dem season draws to a close, we look forward to seeing the Housemate that will win the Bet9ja prize money.

#BBNaija Season 4 Day 81: Imagine a night with the Pepper Dem Gang and music legend, 2Baba… Hold that thought!
VIDEO: #BBNaija Season 4 – The 13th Live Show might be missing an Eviction but it sure unveiled an Ultimate Housemate – Frodd
Advertisement

Battle of the Sounds: Season 2 To Adopt New Tweaks for COVID-19 Safety

VIDEO: S-clive – Thats All I Know