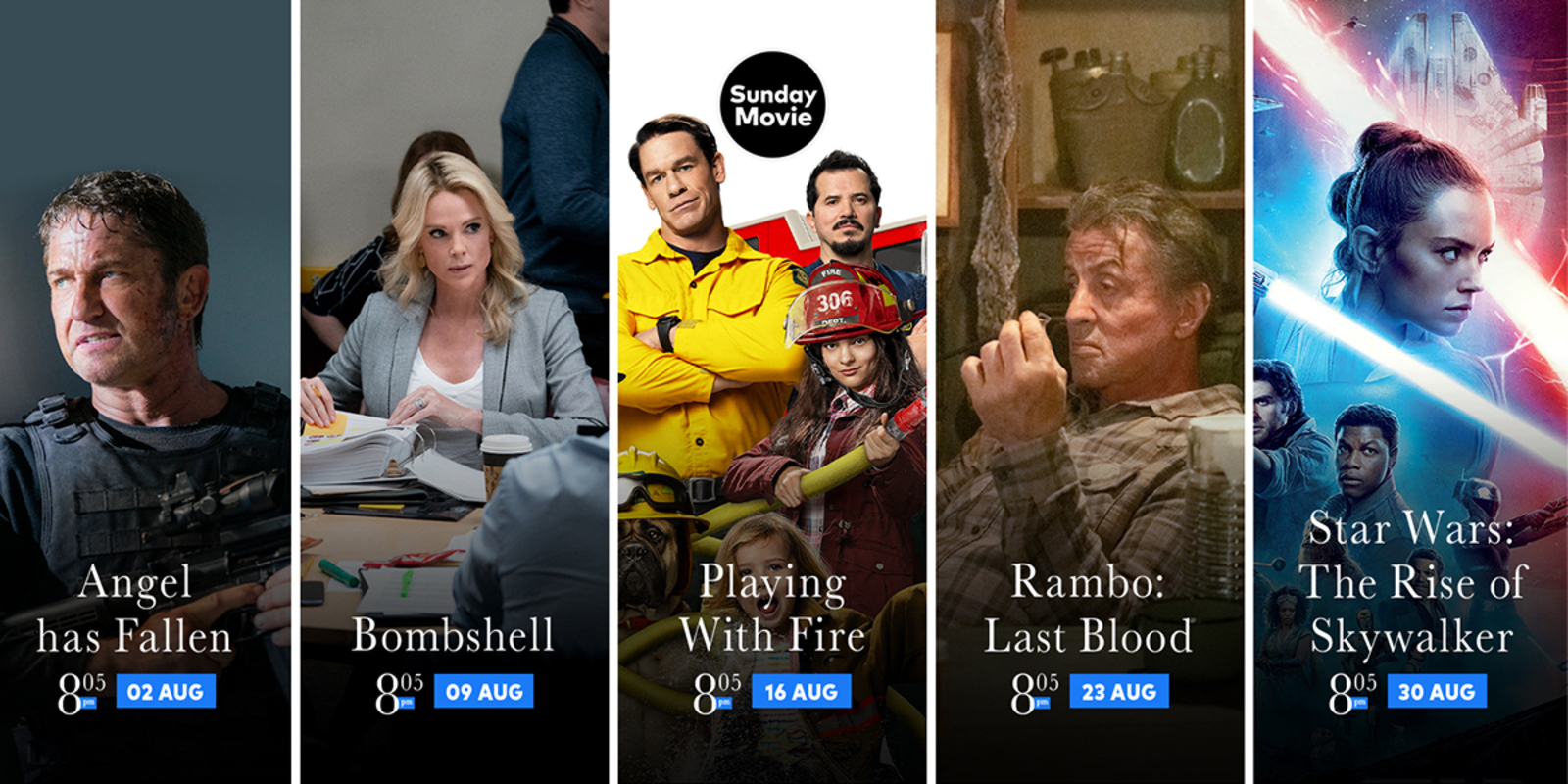 Angel Has Fallen
He’s played God and the President of the United States. Morgan Freeman brought his characteristic charisma and gravitas to these roles in Bruce Almighty and Deep Impact. In your first Sunday night movie this August, Angel has Fallen, Freeman returns to the role of POTUS. In the first two films, he played Speaker of the House then Vice President to Aaron Eckhart’s POTUS. But for the third instalment in the Fallen franchise, he’s the big cheese. And of course Scottish treasure Gerard Butler returns to the role of Secret Service Agent Mike Banning. If you’re a fan of the franchise or love action-packed thrillers, make sure you don’t miss this one.

Bombshell
There’s no denying how astounding the makeup is in this movie. After all, it did win an Oscar for transforming the actors almost beyond recognition. But it’s not all about the hair and makeup. Charlize Theron, Nicole Kidman, and Margot Robbie are in top form as always. Airing on Women’s Day, the film focuses on the sexual harassment that took place at Fox News and the women who came forward to denounce it. 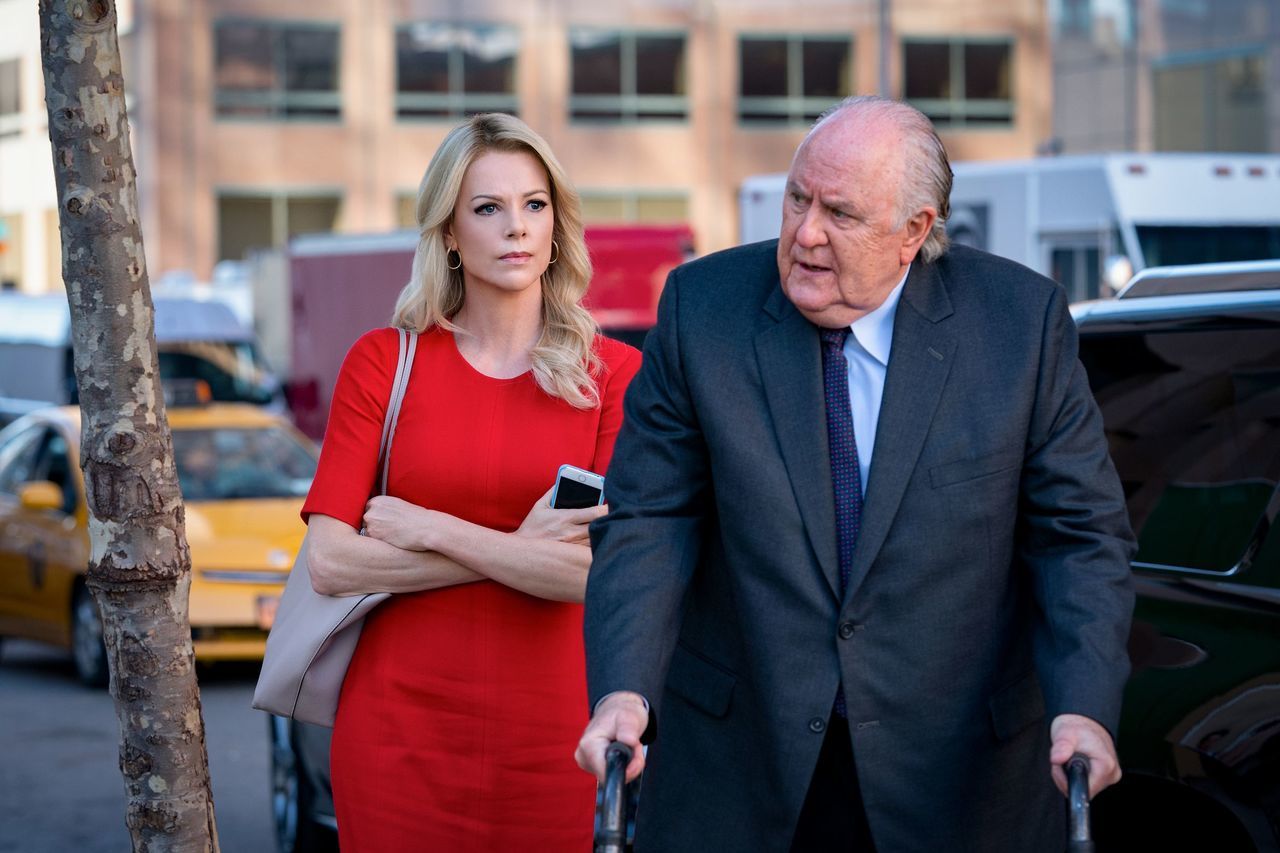 Playing with Fire
An awesome cast including John Cena, John Leguizamo, Keegan-Michael Key, and Dennis Haysbert comes together for this hot comedy about a group of smokejumpers who unexpectedly find three children in their care. Smokejumpers, you ask? Smokejumpers are first-response wildland firefighters. Sounds pretty cool, right? Or maybe that should be “sounds pretty hot … ”

Rambo: Last Blood
Another franchise favourite in the August mix is Rambo. The fifth instalment, subtitled Last Blood, sees John Rambo head to Mexico on a very personal mission. Watch it and let us know where it ranks on your Rambo list.

Star Wars: The Rise of Skywalker
August ends on a high note, so high it finds us all the way in a galaxy far, far away. The third instalment in the Star Wars sequel trilogy and the ninth in the Skywalker saga, it has J.J. Abrams back in the director’s chair.  If you’re a die-hard fan, settle in for another viewing. If you enjoy the movies, but missed this one, make sure you conclude your month with the conclusion to this epic saga.

M-Net Movies Premiere
Hugh Jackman just landed an Emmy nomination for his role in Bad Education, which airs on M-Net Movies Premiere this August. Focusing on the true story of public school embezzlement at Roslyn High, it was written by Mike Makowsky who attended the school at the time of the event. It also stars the marvelous Allison Janney, so be sure to check it out.

You can also check out these fresh titles on channel 104 this month:
10 Minutes Gone
All the Devil’s Men
In Plain View
The Current War
Submission
The Dancing Dogs of Dombrova

Local Love on Box Office
You can still support local films on DStv Box Office this month, so grab your blanket, hot chocolate, and buttery popcorn and settle in for these great South African films.

World Cinema
Hop around the world from the comfort of your armchair with these films on M-Net channel 101.

Keys to the Heart
Sunday 2 August, 22:40
A charming South Korean dramedy about a washed-up ex-boxer and how he reconnects with his estranged family.

Pain and Glory
Sunday 16 August, 21:45
Acclaimed Spanish filmmaker Pedro Almodóvar directs Antonio Banderas in a moving performance that landed him a nomination for Best Actor at this year’s Oscars. Also written by Almodóvar, the semi-autobiographical film follows the story of a director, suffering from chronic illness, as he reflects on his life choices.

The County
Sunday 23 August, 22:45
A gripping Icelandic drama in which a widowed farmer begins a new life on her own terms by fighting against corruption and injustice in her community.

Pororoca
Sunday 30 August, 23:00
This Romanian film follows the story of Tudor and Cristina whose lives change when their daughter disappears in a park.