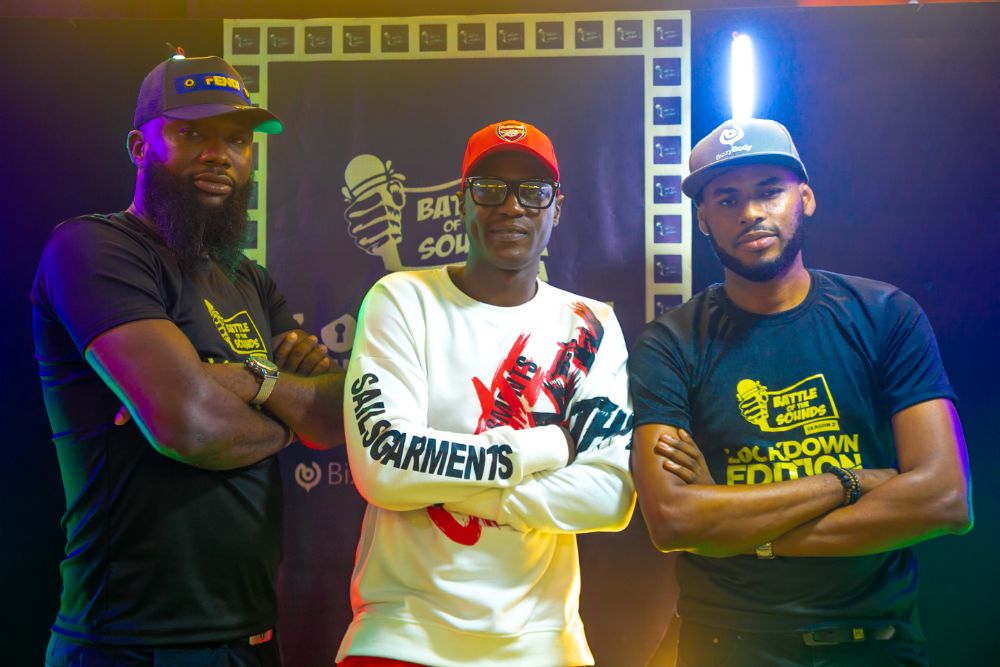 Battle of the Sounds 2020 (Lockdown Edition) was one that left the viewers, fans, judges, and contestants with thrilling memories that they all would linger on for a long and lasting time. The first day until the last was indeed fierce. The thrills, the applauds, the rough, and the hilarious performances made it a show to watch and watch all over again.

Warriors (i.e. contestants) were grouped into eight (8) nations (i.e. teams) to battle each other in three genres of music; Rap, Reggae/Dancehall, and Afropop to make them earn points from the judges and fans alike. The Nation with the highest aggregate point was to be declared the champion.

We had the energetic Red Mercuries, the Electrifying Uranus 77, the fantastic Venus Crew, the Fierce Saturn Stars, the courageous Da Neptunes, the powerful Mars Aliens, and the confident Pluto Gang.

Let us take a sneak peek at some of the contestants who took up the flag of their Nations to battle fiercely.

He calls himself the new school rap king. Born and raised in Abuja before migrating to Lagos, David Samson (real name) stood out among other warriors with his electrifying delivery, massive punchlines, and flawless ability to freestyle on the spot. Young Incredible was so fierce in battles that, he had the highest number of battles for his team and he never lost any, in fact, he had a battle where he crossed into a genre; Afropop, which was not his original genre and still didn’t lose!

Though his team had a rough time agreeing on decisions made internally, he wasn’t distracted, he gave his best and his team eventually emerged champions.

Young Incredible also won the prize for the ‘Best in Rap’ at the tournament.

If Battle of the Sounds was a person, then it would be this guy!

Youngcrez is the man, the fight, the war, the ‘Indaboski’ of music. Originally signed up to represent his Nation in the Afro-pop category, he ended up battling in all three genres for his team, not once, not twice. Who does three genres of music flawlessly at the same time?

You have to give it up for Johnson Gospel Oseh (real name) or Crez – as he is fondly called at the battleground, he did it all for his team. A team that originally started out with five (5) warriors on the front line only for three (3) to opt-out after day one of the battles.

Crez was extremely instrumental in making sure his team came in the top three, coming out as the 3rd best nation in Battle of the Sound 2020, a rewarding feat for the hardworking warrior. He also won himself a prize as the ‘Best in Afro-pop’ at the tournament.

Like Youngcrez, Tellz came from a team where the other warriors chickened-out, but he also flew his Nation’s flag and rode fiercely to battle. He is regarded as one of the favorites in the tournament, coming close enough as champion in the Rap and Reggae/Dancehall categories at the tournament.

The judges took pleasure in analyzing his lyrics and style every time he battled and kept giving accolades. However, since it was a game of judges as well as fans, Tesem Ikima Linus (real name) had the fans of his opponents to contend with after every battle and this affected his overall journey. Though he came into the tournament as a rap-head, his versatility got him to win the prize of the First-runner up in the Reggae/Dancehall category of the tournament. Check him out on social media, he’s got amazing contents.

One of the warriors with the ‘dopest’ swag. Ibrahim Hussien a.k.a. IBNL has got bars and has got style also. Always rep’ing the street, IBNL does well on hitting punchlines to ‘praise the street’. He is a fantastic rapper and gave other rappers a tough time in the tournament. He is one of the warriors with the strongest fan base in Battle of the Sounds 2020, He never lost any battle based on fan coins, his fans, and surprisingly his mum, always had his back.

Rumour had it that this guy was the secret weapon to his team’s victory. Rated among some of the few artiste who lost the lowest number of battles both on the judge’s side and on the fan’s size, this dude was the magic for his Nation. This very unassuming ‘Rasta-man’ won the prize for the Best Reggae/Dancehall Artiste at the tournament. Kudos to Louis Adeola (real name) for being the real MVP for his Nation.

Once called the “Adekunle Gold” of his Nation, Walexey gave it all for his Nation, and even though his Nation went with a few warriors to battle, this warrior sacrificed everything for his team. Walexey (real name; Olawale Olaniran) was among the Best Afro-pop performers for the show. He came second in the Afropop category at the tournament.

This warrior’s rap skill is so extraordinary that he sounds like a mashup of Falz tha Badguy, Olamide, Oladips, and Zlatan at the same time. One of the 5-Star Generals of his Nation, Obafemi Prince (real name) scored very good points for his team. If there was any warrior there at the battleground who knew what rap music and being commercially viable is all about, it will be this dude who ended up leaving a mark in the hearts of the judges, his fans, and even the organizers simply with his signature cane trade-mark and flawless super-audible rap flows. One can say the only reason why he lost the first position to Young Incredible at the tournament was simply because he took on fewer rap battles than Young. We are all happy he came second though.

Adeolu Idowu (real name) is an indigenous rapper and singer X-two gave the other nations a run for their money. His rap battle with Young Incredible currently holds a record as one of the most viewed battles on Facebook. This dude will give you a show if you want a show. A fantastic entertainer and performer. He was the second runner-up at the 2018 edition of the Battle of the Sounds.

His teammates call him ‘the pathfinder’. He was always underground doing the necessary job needed for his team to win. Known for always speaking with confidence and his opponents on the battleground with his endless brags about winning from the first day of the tournament, Warzpilot (real name; Temitope Adeoye) was among the most instrumental for his team, It could be said that he had one of the strongest fanbases in the tournament. Always underground, but extremely powerful. He also represented his team in two genres, Afro-pop and Reggae, combining both the Judges and fan coins, Warzpilot only lost one battle for fan coins to another nation and so held an almost flawless record in the tournament.

One of the Judges’ favorites among the Afro-pop warriors. Confident and vibrant on the mic, Romeo Dasabah (real name) and his teammate Tellz Ikima were fierce, they will usually overpower any warrior in a swift at the battles. Senseii was a part of the 2018 Acapella champion group at Battle of the Sounds. Then he repped the team in the blue costume – Saturn Stars.

VIDEO: #BBNaija Shine Ya Eye – The ladies have landed!