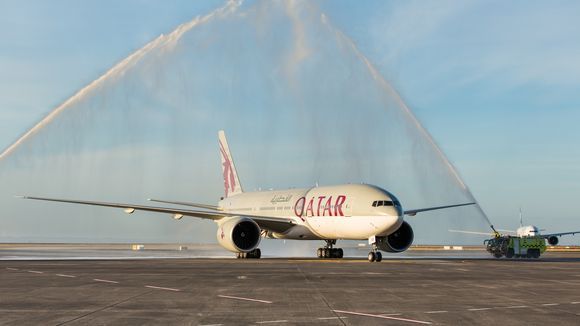 Qatar Airways is the new titleholder for the world’s longest regularly scheduled airline flight. The airline’s inaugural service on the 9,032-mile route between its Doha hub and Auckland, New Zealand. Flight time on the route is 16 hours, 10 minutes, on the New Zealand-bound leg. The return, which typically faces more headwinds, is scheduled for a whopping 17 hours, 30 minutes, according to the carrier’s website.

Qatar Airways’ new service edges it past Middle East rival Emirates, whose 8,819-mile route from Dubai to Auckland clocks in at 16 hours, 5 minutes, in the direction of New Zealand and at 17 hours, 20 minutes on the return.

With that, Qatar Airways can now claim the world’s longest flight both by time and by distance, according to air travel intelligence company OAG. That latter distinction, however, comes with something of an asterisk.

In a statement, Qatar Airways CEO Akbar Al Baker said “achieving the title of world’s longest flight for the return record-breaking service” marked a “momentous occasion for Qatar Airways and provides another accomplishment to celebrate in this our 20th year flying the flag internationally for Qatar.”

Still, Qatar Airways may not want to get too comfortable with its “world’s longest flight” title.

Singapore Airlines plans to launch nonstop service connecting Singapore to New York in 2018, when it expects to become the first to fly a new “ultra long range” variant of Airbus’ new A350 widebody. At a distance of more than 9,500 miles, that route would top them all.