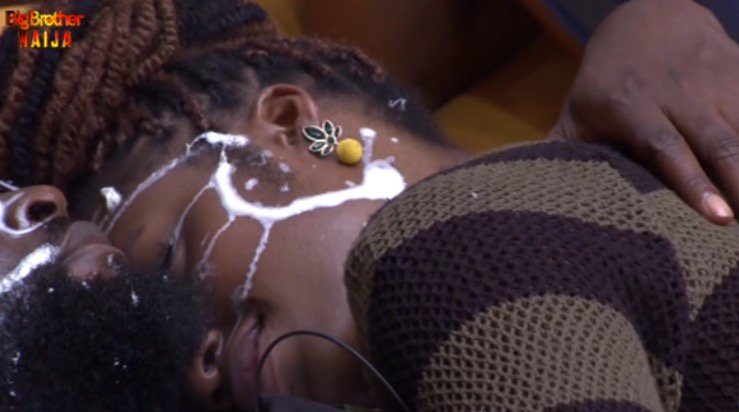 As a little relief exercise in the Pepper Dem House, Biggie surprised the Housemates with amusing freezing moments. As anticipated, Biggie’s Ninjas played a major role in the freeze times. Trust us to capture the different categories the Housemates portrayed during this little exercise:

The Snoring Hulk
While proving to be smarter than Biggie, the Housemates took comfortable positions as soon as the heard him shout – Freeze! In their respective “fake sleeping” positions, our very own Mike, was found snoring, as he had already moved past the freeze moment and moved straight into dreamland.

Bonnie and Clyde
We always have that one couple that does everything together. Eat together, play together and freeze together. Our Pepper Dem couple of the Season – Ghedoni, served couple goals during the freeze moments. Biggie’s Ninjas did not spare them during the whip cream rounds they had in the garden, as they were the easy target for Biggie’s torture.

The Sleep-Warriors
Ike was seen fighting a Ninja who attempted to take off his sunglasses during the freeze exercise. This prompted Biggie’s Ninjas to raid the House for the second round of freeze session – as an act of revenge for Ike. Unfortunately, the other Housemates suffered the whip cream torture, except Jeff who saw the whip cream punishment as a treat, as he licked off the cream as the Ninjas sprayed on.

The Jokers
Omashola did not fail to portray his goofy side during this freeze times.

Ella, KimOprah, Mercy, Sir Dee and Tacha are up for Eviction. Vote for your favourite Housemate here, via the MyDStv App, via the MyGOtv App or via SMS. Voting closes on Thursday 11 July at 21:00 WAT.