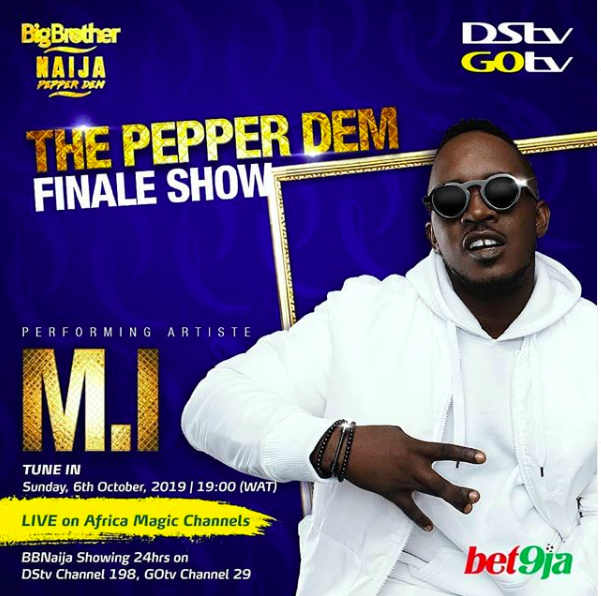 Every single artist brings something explosive to the Stage. Something guaranteed to leave everyone mind blown. Take for instance…

If any artist has had a great year, it’s this phenomenal award-winning lady right here. After signing a major deal with one of the biggest record company, featured on Beyonce’s album and released her chart-topping single ’49-99’, Tiwa Savage is set to take over the world, but first, she will be making a stop to take over the Big Brother Naija stage and have all of us in a frenzy.

Away from twitter beef and rap battles, MI Jude Abaga is sitting comfortably on the throne of Nigerian rap and he isn’t stepping down anytime soon except to grace the Big Brother Naija stage with a legendary performance. The head honcho of the Chocolate City Music and multiple award winner will be on stage to show us why he is the chairman of Nigerian rap.

Coming from the success of his second Album, ‘Wilmer’, Patoranking has shown that when it comes to being consistent in the Nigerian Music Industry, he knows how it is done. He will be showing what it means to be consistent in the game as he steps on stage. Hopefully, he sings one of the songs he was featured on that has become a favourite in the Pepper Dem House. See brother… brother wey mumu 🎵🎶

Of course, we won’t have all these amazing performances without incredible dancers to turn up the tempo and that’s where Imagneto, ZinnyX, and Dance Machine Empire come in.

VIDEO: Kweku Afro – Monalisa
VIDEO: #BBNaija Season 4 Day 97 – Thought the Pepper Dem Five will be partying alone? Then you were in for a great surprise
Advertisement