All eyes will be on the Original African channel come Saturday, 29 November when Channel O celebrates the biggest night in African music the 2014 Channel O Africa Music Video Awards.

Broadcast live from Nasrec Expo Centre in Soweto, this year’s show-stopping event will be hosted by the ever versatile, seasoned TV presenter and director Siyabonga “Scoop” Ngwekazi alongside small screen darling, model and presenter Eku Edewor.

Hailing from Port Elizabeth in the Eastern Cape, Siyabonga gained an interest in arts from a young age and cut his teeth in the industry when he presented the pop culture magazine show Street Journal. Since then, he, alongside Nonhle Thema, became the face of Vuzu when the youth channel launched in 2009, co-hosting the weekday celebrity news magazine show V-Entertainment. Mbombo, as he is fondly known in his hometown, is also known for his impeccable fashion sense and in 2010 he was named GQ’s Best Dressed Man. 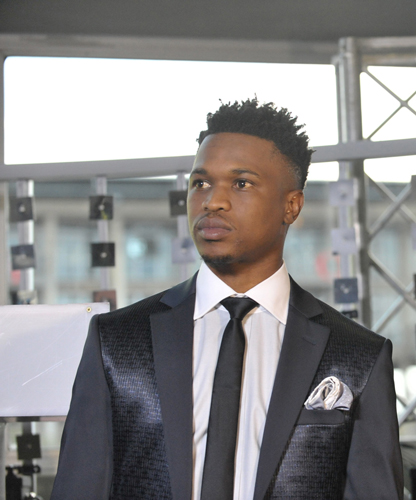 2011 proved to be a big year as he and his close friends and business partners – Lungile Radu, Thomas Gumede and Simphiwe Mhlongo – launched their production company Parental Advisory Productions, which is responsible for shows like Forever Young, Mo Loveand Goal Diggerz Season 3. A few months later Scoop launched his clothing label, Pieces by Pap, a street wear brand that gathers inspiration from African themes with an international feel.

“I am honoured and privileged for this awesome opportunity to be hosting Africa’s longest standing music video awards show,” says Siya.

His striking co-host is a graduate of English and Theatre from the University of Warwick and has trained as an actress at the New York Film Academy. Whether gracing the covers of magazines or interviewing stars on 53 Extra, Eku has established herself firmly in the African entertainment industry as a talent on the rise.

Born Georgina Chloe Eku Edewor-Thorley in London to Nigerian and British parents, Eku’s first job in entertainment was as a production assistant to film producer Damian Jones (The Iron Lady, Belle). It was during this time, that she struck up a close friendship with British actress Naomie Harris (Skyfall, Mandela: Long Walk to Freedom) whose talent would inspire Eku to continue chasing her dream of acting.

In 2006, she was cast as a contestant on the hit reality show Britain’s Next Top Model and has since gone on to build an extensive resume, including appearing on Big Brother Africa All Stars, hosting the 2013 Miss Nigeria competition, the Elite Model Look Nigeria competitions (in 2010 and 2011) and recently wrapped shooting the movie When Love Comes Around.

“I feel incredibly blessed that I have been given a great opportunity to display how much I love what I do and I look forward to having a great night celebrating our musicians on the largest music platform in Africa,” adds an elated Eku.

Voting takes place across a wide range of digital platforms: via the website and mobile site – voting on the website and on the mobile site [www.channelo.tv] is free and you are allowed to vote up to 100 times on both platforms respectively; via WeChat – voting on WeChat is free. To vote using WeChat on your mobile, go to the app store on your phone, download the WeChat app, create your profile, then search for Channelotv and add the account. You can vote up to 100 times! For terms and conditions and more information, log on to www.channelo.tv. Voting is still open and closes on the 23 November at midnight.