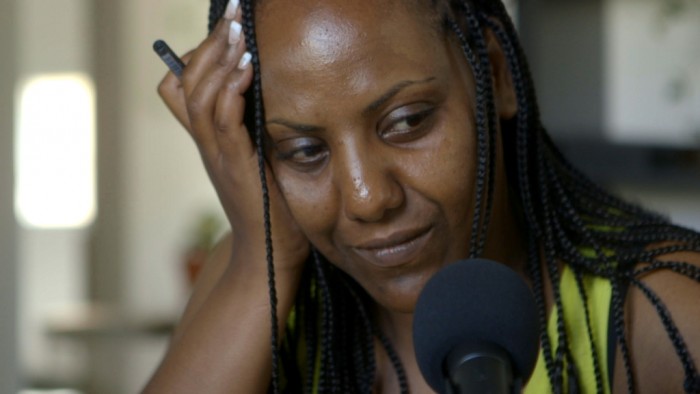 In the last decade, more than 300 000 Eritreans have fled the military dictatorship in their homeland, despite a ‘shoot to kill’ policy on the borders. They are followed by an estimated 3 000 every month.

Since 2006, when Europe closed its borders to Africans seeking asylum, more and more Eritreans have sought refuge in Israel, reachable by land via the Sinai desert.

In 2009, Bedouin smugglers in the Sinai desert started kidnapping, torturing and ransoming these refugees.

The Sound of Torture follows Meron Estefanos, an Eritrean journalist living in Sweden. She broadcasts a weekly programme on Radio Erena called Voices of Eritrean Refugees. Meron says, “In this radio programme, we give voice to those in the torture camp and to those who are trying to set them free.”

The hostages’ only lifeline is the cellphone provided by their kidnappers. Family members often hear them being tortured as they desperately beg their relatives for the money needed to secure their release.

International human rights organizations report that an estimated 35 000 Eritreans have managed to cross the Egyptian border into Israel, but of that number 8 000 of those have reportedly endured these torture camps.

The Sound of Torture follows Meron from Sweden to Israel, where the Eritrean ‘infiltrators’ have no legal status whatsoever. There she meets with former hostages, as well as family members trying desperately to free wives, sisters and children. She also travels to Egypt to see the torture camps.

For Meron, giving the hostages a voice is no longer enough. “I want to end this,” says Meron. “I come from a country where animal rights are respected, you know? You hit a dog in Sweden, you go to jail for six months. You know? You kill a cat, you go to jail for three-and-a-half years. And here, I listen to people being tortured every hour. And the whole world is watching, doing nothing. It’s just… I don’t know.”

The heart-rending documentary has won six international awards, including The Audience Award from Movies That Matter.