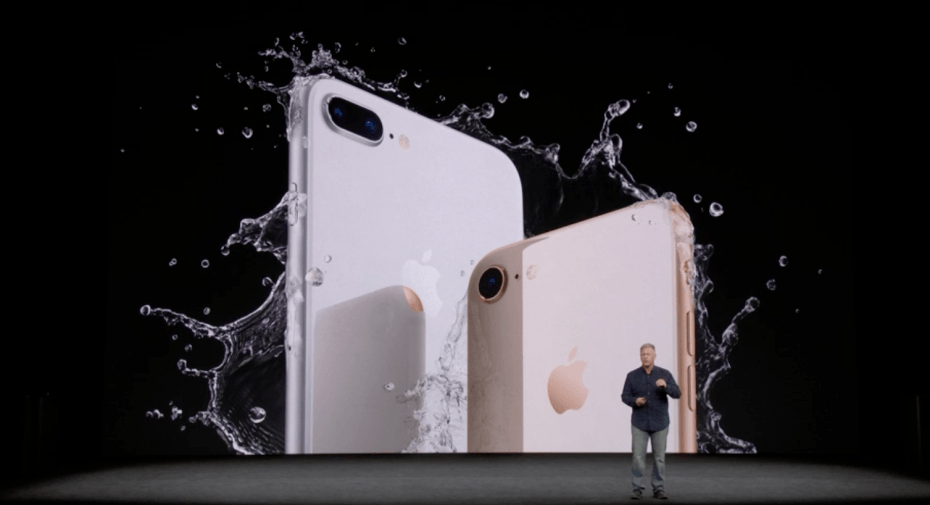 Today Apple announced the iPhone 8 and iPhone 8 Plus.

This is the first time Apple is unveiling three new iPhones — the two iPhone 8 models will join the new flagship iPhone X (which has an OLED screen) to round out the product offerings. The company has used an iterative process before, releasing budget iPhone models and updating the iPhone 6 to the 6s, for example. This marks the first time two existing models were given the typical upgrade treatment but join a high-end model.

Partnerships with companies like Mophie, Ikea, iHome, and others means the charging will be far easier than using a cable. You will be able to set the phone down on a mat to charge, even in your car and at the office.

The 4.7-inch iPhone 8 and 5.5-inch iPhone 8 Plus are exactly what you’d expect, even though they’re not called the iPhone 7s and iPhone 7s Plus. The smaller model features 2GB of RAM and the larger has 3GB of RAM, just like their predecessors. They now use the faster A11 Bionic processor and have better cameras.

A new lighting feature might appeal to photo experts. In the 8 Plus, you can compose a photo and the cameras sense the scene. Machine learning reads the subject and changes the lighting contour over the portrait subject’s face. You can swipe to select different lighting effects to add dramatic impact.

For video, the new phones divide frames into tiles and use predictive tech to optimize the image. You can shoot in 1080p at 240 frames per second.

The iPhone 8 Plus retains the dual-camera design that made that larger model worth the extra price, especially if you like taking portrait photos or switching from a telephoto to a wide angle lens. For the hardcore fans who like the power and keeping things the same, the iPhone 8 Plus is a solid new phone that iterates on the iPhone 7 Plus with minor design changes.

The phones are water resistant like the previous models. New augmented reality support means a whole new boatload of apps that can let you experience real-time overlays.

The new models ship with iOS 11.

Which one do you buy?

As usual, the decision about which model to buy comes down to what you want to compromise (and retain).

Here’s where things get murky. The biggest change on the iPhone X is that the screen extends to the edges, and there’s a new virtual Home button and a curvature on the top of the screen. For those of us who don’t like to upset the Apple cart too much, the iPhone X is a fairly radical departure from the norm, and it will take some time to adjust. For example, many iPhone users can find the Home button in the dark. That won’t be as easy with the iPhone X.

Another important “missing feature” on the iPhone 8 and 8 Plus: They use the older LCD screen technology instead of the noticeable brighter OLED tech common on Samsung phones and now the iPhone X. There’s a decision to make here as well. This is the first phone Apple has made that uses OLED, and while it’s a good bet that they lined up their suppliers and manufacturing process to avoid any major snafus, the safer bet is sticking with what has worked in the past.

The iPhone 8 and 8 Plus do offer wireless charging, so you gain that feature.

Changing the product offerings like this — with older budget models, the iterative models like the 8/8 Plus that mainly provide more power and the new iOS, and then a “pro” model like the iPhone X — is a radical new direction for Apple that makes it harder to make a decision.

That said, it’s always good to have more options for an even wider group of users.

Continue Reading
Advertisement
You may also like...
Related Topics:Apple, iPhone 8, iPhone 8 Plus