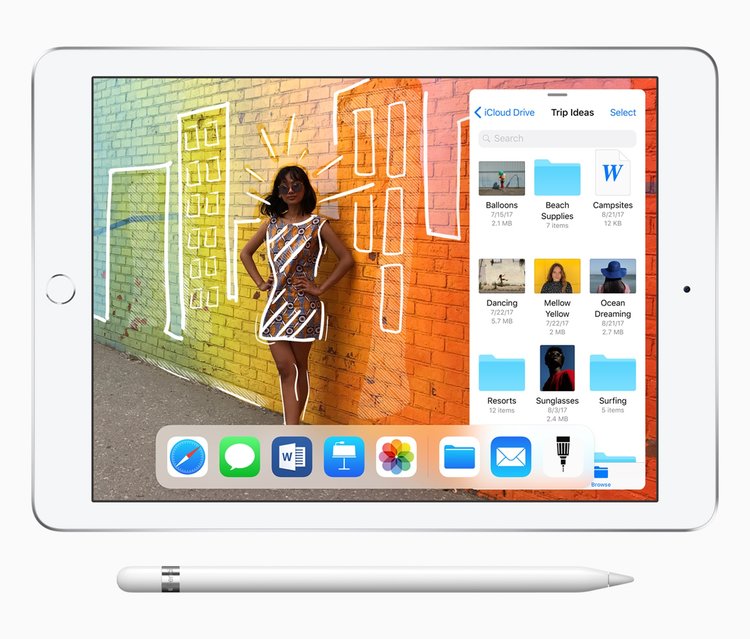 Contrary to numerous rumors before the event, the sixth-generation iPad will retain similar pricing to its predecessor: a 32GB Wi-Fi-only model for $329, with a Wi-Fi + Cellular version at $459. As before, Apple will offer 128GB upgrades at a $100 premium, and each model will be available in silver, space gray, or gold.

However, the 32GB Wi-Fi model will be offered at $299 for schools, and students’ iCloud accounts will receive 200GB of free iCloud storage — up from 5GB for regular consumers. Additionally, an inexpensive third-party stylus called the Logitech Crayon will be offered for $49, while the Apple Pencil will be discounted to $89 for students. The Crayon lacks Pencil’s pressure sensitivity, but supports palm rejection and angle-sensing, with a similar eight-hour battery life.

While last year’s “iPad” effectively merged the bulkier exterior of the iPad Air 1 with the A9 chip-powered internals of the iPad Air 2, this iPad is faster, thanks to Apple’s A10 Fusion chip. That enables it to rival the iPhone 7 and Plus in horsepower without matching the more expensive A10X-based iPad Pro models. Apple claims that it delivers “40 percent faster CPU and 50 percent faster graphics performance” than the prior iPad.

Power efficiency improvements in the new iPad should quietly enable it to enjoy longer run times compared with other iPad models as well. Apple flatly promises “up to 10 hours” of typical battery life for the new iPad, but last year’s model went considerably higher. Notably, Apple has kept the new model’s thickness at 7.5mm and its battery at 32.4 watt-hours, the same as last year’s model and the original iPad Air.

The new iPad will weigh one pound and include a FaceTime HD camera, 8-megapixel rear camera, Touch ID, and a gyroscope, plus the option of up to 300Mbps LTE cellular with GPS and compass functionality. It will, like other recent Apple devices, support ARKit for augmented reality apps. Like last year’s model, Apple is keeping the 9.7-inch display’s resolution the same at 2048 by 1536, and leaving lamination and anti-glare coating out; it notably does not have the TrueTone or ProMotion features of the iPad Pro, either.

In addition to announcing new versions of its iWork suite — Pages, Numbers, and Keynote — with Apple Pencil support, Apple also noted today that over 200,000 education and reference apps are now available in the App Store. The new iWork apps will include support for Apple Pencil Smart Notation, handwritten notes that are linked to the words you’re marking up.

Apple’s introduction of the new iPad is likely an effort to move the needle on its tablet sales, which were largely stagnant until a 10 percent upturn last holiday quarter. Despite Apple efforts to portray iPads as “post-PC” devices, Google’s inexpensive Chromebook laptops have become the “computer of choice” in U.S. classrooms, providing many students with early exposure to Google’s online services and apps.

Continue Reading
Advertisement
You may also like...
Related Topics:Apple, ipad