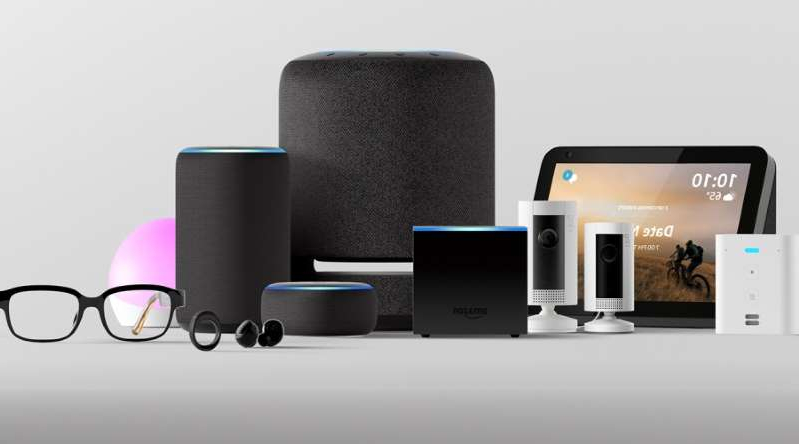 At today’s marathon product introduction, Amazon debuted a wide variety of its Echo-branded Alexa-powered products, both for the home and for the outdoors.

But that presents the problem: with all these new and upgraded Echo devices, which should you get? What follows is a rundown of the basic specs, prices, and availability of the most interesting products introduced today. Take a look, and see if any strike your fancy.

Now you can put Alexa directly inside your ears. Amazon’s Echo Buds are the first native hands-free Alexa headphones—an important distinction, because there are already headphones on the market with Alexa inside. These wirefree buds have Bose noise-canceling tech in them, which you can turn on and off by tapping on one of the earpieces. Amazon claims five hours of battery life per charge. The Buds will ship in October for $130. Swishy ponytail not included.

If cramming Alexa into your ears isn’t enough, how about putting Alexa directly onto your face? Echo Frames are Amazon’s new Alexa-enabled smart glasses that let you talk to Alexa without having to whip out your phone. This means you can talk to Alexa in all the places you previously could not without being a rude phone person, like at the movies, in the gym locker room, or at your favorite brunch spot. OK, maybe barking at Alexa in those situations would still be rude—which is likely why Amazon is releasing these glasses in limited quantities to start. If they’re a hit, then we’ll see production ramp up. These smart glasses—which have microphones, but critically, no camera—go on sale to beta testers this fall for $180 a pair. You can add a prescription if you want as well.

At this point, do you have any limbs that aren’t Alexa-enabled? The new Echo Loop is a smart ring, because of course it is. (The company really missed the opportunity to call it the Ring Ring.) Two microphones, a tiny speaker, and haptic alerts let you talk to the hand (your own) to respond to notifications or ask Alexa a question. Like the glasses, the rings will be sold in limited quantities this fall (at $100 a pop) to people brave enough to test the experience. Just remember to take it off before you wash your hands. Or take a shower. Or go to the bathroom. Or …

The smart speaker that started it all has a new look. Amazon refreshed its Echo device by merging it with its larger sibling, the Echo Plus. Now the Echo gets the same drivers and the 3-inch woofer from the Echo Plus, so it’s louder, clearer, and has a more powerful bass response. That’s a good improvement—among smart speaker options, the Echo has always ranked low on the list for audio quality, and these upgraded internals should help clean up the sound. The new Echo also gets the fabric cover of the Plus, and there’s a new blue color option.

This “enhanced” Echo experience is tailored for 3D audio. It has five speakers inside: midrange speakers for the left, right, and the top, a dedicated tweeter for the highest frequencies, and a 5.25-inch woofer for the lows that sits in a ported enclosure to give it more punch. Also, you may notice … it looks quite a bit like an Apple HomePod. Amazon is aiming the Echo Studio at audiophiles—it supports Dolby Atmos audio and can connect to 4K Fire TV Devices to provide the soundtrack to whatever you’re watching. Also, it should offer the kind of higher-fidelity playback that Amazon’s new HD Music service begs for. But really, if you subscribe to high-quality audio streaming service, you likely prefer to listen to music on something much better than a squat little smart speaker. $200, preorders available today.

This third version of the Echo-with-a-screen devices is much the same as the Echo Show 5 that came out just a few months ago. This one has a bigger screen (8 inches) and is also $40 more expensive, at $130. Other than that, it shares the same audio and video tech as the Show 5. Amazon’s pitch with this middle child Echo Show is that “customers love choice.” Put a different one in each room of the house, perhaps, with bigger screens in bigger rooms. Amazon offered the kitchen as an ideal place for the Show 8. Users could set timers, play videos, and pull up recipes.

Echo Dot With a Clock

It’s the same old Echo Dot, but now it has a little digital clock on the front. The clock will switch to displaying the temperature when you ask about the weather. Available for preorder today for $60.

It’s a lamp that you can make glow any color you like. You can also set timers so it dims as you fall asleep and brightens as you wake up. $30

The Amazon-owned Wi-Fi hardware company got some love today as well. There’s a newly refreshed Eero router that looks like a taller, fatter version of the Eero Pro. It has many of the same capabilities as the second-generation Eero, like a dual-band radio, mesh networking functionality, and the option to purchase an Eero Secure subscription for a bundle of extra network management features. The big news is that the devices are much cheaper than last time. A single Eero is $99, and a three-pack is $249.

Two new cameras join the Ring lineup, which already includes security cameras and video doorbells. The new Stick Up Cam can be placed indoors or out, and there are three ways to power it: a wall outlet, its internal battery, or through a solar accessory. It does all the same Stick Up tricks, like night vision and motion detection. It’s cheaper now too, at $100.

The other new Ring camera is the Indoor Cam, which is a cheaper ($60) version of the Stick Up that just plugs into the wall and is only intended for use (hence the name) inside the house,

Somewhat out of left field comes this announcement: Amazon its launching its own networking protocol. Amazon Sidewalk will use the free 900MHz band to connect various low-power outdoor internet of things gadgets. Tracking devices—things like Tile, or the location-aware tags you attach to children and pets, which require only teensy amounts of bandwidth—are good candidates to use a network like this. In fact, Amazon is going to put out a pet tracker called Ring Fetch (shown above) that will work on Sidewalk. The Fetch will become available next year at some point.

The voice assistant that lives inside all of these products got some significant upgrades at Wednesday’s event. For example, it’s more sensitive to emotion—if you’re yelling at it, Alexa will understand and acknowledge your frustration with its imperfect responses. You’ll be able to add celebrity voices for $1 each, with actor Samuel L. Jackson as the first. There are also new multilingual modes that will let you switch between various Alexa languages (English, Spanish, French, Indian English, and Hindi) depending on where on the globe you live.

A new feature lets parents white-list contacts that their children are allowed to chat with through Alexa. Kids can even chat with other Echo-owning kids; both parents have to set it up and authenticate it for them individually, but then the kids can chat all they want.

There are some new privacy features coming to Alexa as well. These will roll out to all Alexa devices, old and new, starting today. Alexa’s Privacy Hub, launched earlier this year, now has a feature that auto-deletes your Alexa voice recordings on a rolling basis. You can set it to auto-delete everything you’ve said after three or 18 months. Also available today is a new way to learn what Alexa is logging. You can ask your Echo device: “Alexa, tell me what you heard.” The device will then read your most recent voice request back to you.

Alexa Hunches is getting new additions. Before, the Echo could send you reminders based on your regular habits. It might remind you to lock the door, or turn off certain lights. Now, Alexa can predict when you’re running out of common household items. When the Hunch suspects you might be low on batteries or printer ink, it will send you a gentle nudge to stock up.