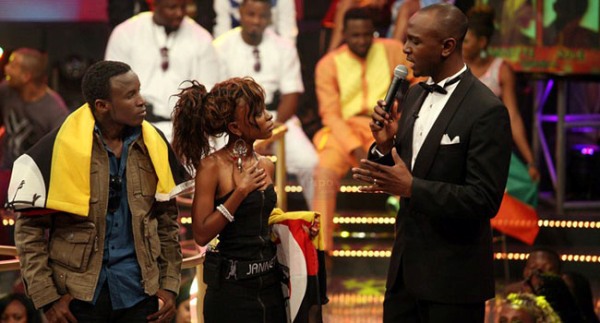 After Kyle busted Keagan butt naked in Talia’s bed, one would guess that he would get some love but she rejected him. While comforting the Zambian Housemate, Keagan tried his luck on her and started kissing her neck and part of her cheeks but she was not in the mood.

Talia seemed preoccupied following her fight with Prezzo and she preferred not to be touched. “This sh*t I put myself into,” Talia mumbled to herself. Keagan tried offering her a massage but she turned it down too.

Daybreak: Half Naked Keagan Cries In Talia’s Arms
There is no room for egos when it comes to love or so it seems. In the wee hours of the morning StarGame bad boy Keagan finally let down his guard and cried in Talia’s arms as the two lay in her bed.

The South African also happened to be half naked at the time and just moments before he tried his luck with the Zambian by kissing on her neck and hinting at more but unfortunately for him he was greeted by a cold serving of rejection. From the looks of things the rejection was just too much for the Upville lad to bear as he starting getting emotional and eventually shed tears and wiped his eyes. The only other time we have ever seen the South African crying was when the Housemates all got sentimental messages from their loved ones back home so clearly being with Talia means quite a lot to him.

While she may have rejected his advances from before it seems that the display of vulnerability worked like a charm as the two started to get quite cosy and were engrossed in a tender moment as the StarGame lass lovingly brushed his face with her hands. The whole entire time the two stared into each others eyes and whispered at each other. Wowza, what is going on between these?

The two Starmates were the only Housemates that woke up to take part in the daily work out session with the Big Brother Africa trainer. Once upon a time Upville was a posh residence that filled only with StarGame’s cream of the crop and the atmosphere was always tranquil. That was until the two Houses were merged and the rowdy Downvillers came into the VIP residence and infested it with the raucous tendencies and wild ways and since then life in StarGame has never been the same for Lady May and Prezzo. So it was without a doubt a welcome change of environment to have some tranquility back in the House.

Blame It On The House
What do you do after a night of heavy drinking that resulted in you making a fool of yourself in front of millions of viewers in Africa?

Well if you are Prezzo you blame it all on the pressures of being in the Big Brother Africa House. Today the rapper did his best to try and justify his actions from last night when he not only got into a drunken feud with Talia but also drunkenly tumbled into the jaccuzi. “On the outside, if I speak for myself, I would drink but I wouldn’t act the fool. But in this frikkin House…” he explained. “It’s the pressure from being locked up,” Talia tried to reason.

The rapper also tried to defend his pottymouth by telling Talia that he did not call her the B-word last night but that he instead called her a “trick”. “It’s the same thing,” Talia snipped. The rapper tried to make light of the situation by saying, “No tricks are things for kids.” Try as you may Prezzo to deflect the attention off you and your boozing antics, it’s too little too late Africa has already seen you acting the fool. It’s pretty clear now that it is not just the mischievous Downvillers that don’t know how to hold their liquor. Naughty, naughty Prezzo.

StarGame Rub Down
Kings and queens of StarGame is what the Housemates felt like today as they got the royal treatment courtesy of Biggie.

A little earlier in the day the StarGamers got a wonderful surprise from Big Brother as each and every one of them was treated with a soothing massage. The Housemates were clearly in much need of some rest and relaxation to recharge their bodies after a dramatic night that included a drunken Prezzo falling into the jacuzzi, Talia and Kyle getting into a heated argument and Keagan and Talia getting extra cozy in bed.

The relaxing rub down also looks to have worked wonders on the Housemates anxiousness over Africa’s decision on Sunday where one lucky StarGame finalist will walk away with USD 300 000. For now the Upvillers seem to have forgotten their woes but that won’t last for long because later on today the Housemates will all have to state their cases before Africa as to why they deserve to be the Winner.

Whilst Talia and Keagan kissed in the jacuzzi, Prezzo, Kyle and Wati discussed the predicament that everyone has found themselves in. Kyle, who also has a thing for Talia, told the boys “I love Talia but I think she made a big mistake. You don’t know Seydou. He is going to be mad. All hell will break loose on Sunday,” he told Prezzo.

Wati on the other hand is on his friend Keagan’s side. “F*#k Seydou. Obviously a better man won. He and Talia’s relationship was unhealthy. He was very controlling. There are plenty fish in the sea. Flying fish, cat fish and mad fish,” Wati said.

According to Kyle, Seydou and Keagan did not get along at all in Downville and when he left, he was close to punching Keagan. “They don’t like each other at all and I bet you sparks will fly, if they see each other on Sunday. Something will pop off. Wati, you just might get a punch too,” Kyle said.

Finale Presentation: Vote For Me!

This is why you should vote for your favourite Housemate; in their own words!

Nerves clearly got the best of our StarGame finalists during their speeches this evening. However, one thing is for sure. Big Brother StarGame is an experience the bunch will not forget any time soon.

Kyle: Kyle reflected on the very beginning of his journey. “Going into the game, I was terrified. When I walked into the house, I relaxed instantly. I have met lots of wonderful people in here,” he said. Kyle then gave a shout out to the Housemates that have fallen by the wayside. Kyle did not say what he would do with the money.

Keagan: “I have been real since Day 1. Everything me and my partner Lee did is stuff we do on the outside. This has helped me bond with Africa. All I can say is it has been very difficult in the House. This House is definitely full of surprises and has been a true test of my character.” Like Kyle, Keagan did not say what he would do with the cash.

Talia: “Everyone in here deserves to win. People have been entertaining since Day 1. There is so much I did not know about myself that I know now. The house helped me to achieve this. I should win because I put in 100 percent into everything I do and I am responsible for all my actions.”

Wati: Wati revealed how adventurous he is and needs the USD 300 000 to build houses for those in need.

Prezzo: “My mission was simply to entertain. “With me what you see is what you get. I am no saint and it has been a roller coaster ride. There have been many ups and downs. I have learnt to live with others and we have all sacrificed a lot. If I win, it would make my country and my mom proud. I will use the money to get my daughter a college plan. A parent’s best gift to his child is a good education. I will also give some of it to those in need.” Prezzo then apologised for everything he has done that might have offended anyone.

Lady May: Jaws dropped when Lady May took to the stage. The Namibian made a grand entrance in shorts, with her drum in tow. She did not make a speech and instead sang titled “Always Be Lady May”. Lady May stunned all when she dropped to the ground and wriggled around the stage. The diminutive singer also tossed her hair about, like a woman possessed. The looks on her fellow Housemates faces…Priceless!

There you have it Africa! Who is your vote going to?

Your Big Brother StarGame Finalists are Keagan, Kyle, Lady May, Prezzo, Talia and Wati. CLICK HERE to vote for your WINNER!