The five candidates for the 2013 BBC African Footballer of the Year award have been announced.

Ivory Coast’s Yaya Toure has made the shortlist for the fifth consecutive year and is joined by Nigerians Victor Moses and John Mikel Obi, Burkina Faso’s Jonathan Pitroipa and Pierre-Emerick Aubameyang of Gabon.

The winner will be decided by African football fans, who have until 20:00 on 25 November to vote for their choice.

The winner will be announced on Monday, 2 December at 19:30 on Focus on Africa on BBC World News (channel 400).

None of this year’s shortlist, which was voted for by 44 journalists across Africa, has won the BBC award before and two of the players – Pitroipa and Aubameyang – are the first nominees from their respective countries.

Aubameyang has been in prolific form over the past year – ending the 2012/13 season with 19 goals for Saint Etienne, which placed him second in the list of top scorers in the French Ligue 1, and helping them to win the French Cup to claim his first trophy as a professional. 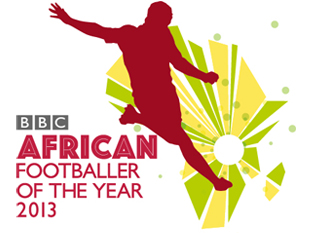 His performances rewarded him with a summer transfer to this year’s Champions League runners-up Borussia Dortmund where he has already hit seven goals in 11 games.

For Pitroipa, his biggest highlights came on the international stage as the winger excelled in the Africa Cup of Nations in South Africa and was named player of the tournament, helping Burkina Faso to shock everyone and reach the final.

The Stade Rennais man has continued to shine for his country, hitting three goals in World Cup qualification as the Burkinabe aimed to reach Brazil by completing a play-off victory over Algeria, having won the first leg 3-2.
Two players on the list fared even better in this year’s Nations Cup; Mikel and Moses were both heavily involved as Nigeria lifted the trophy for the first time for 19 years.

Mikel also won silverware with his club Chelsea in the form of the Europa League – and on a personal note 2013 was the year when he finally struck a goal for the Blues, coming in his 185th game.

Goals have flowed more readily for Moses, the winger hit six for Chelsea in 2013 before he moved on a season-long loan to Liverpool, where he scored on his debut in September.

The most potent of the three English Premier League based-players on the list is midfielder Toure. The Ivorian has bagged 12 goals so far in 2013 – including some exquisite free-kicks.

Although he and his Manchester City team-mates were unable to retain their league title last season, Toure was still a force to be reckoned with in the centre of the park – commanding, creative and increasingly clinical in front of goal.

The BBC Africa Footballer of the Year Award started out as the African Sports Personality of the Year in 1992, before moving to its current format in 2001.
Voted for by the fans, the prize has been won by legendary African football figures such asGeorge Weah, Abedi Pele, Didier Drogba, Nwankwo Kanu and Jay-Jay Okocha in the past – and the array of winners grows ever more impressive by the year.

Watch out for updates on the competition on social media via BBC Africa’s Twitter (@bbcafrica), Google+ and Facebook Fan Page and join the conversation on Twitter using #bbcafoty.