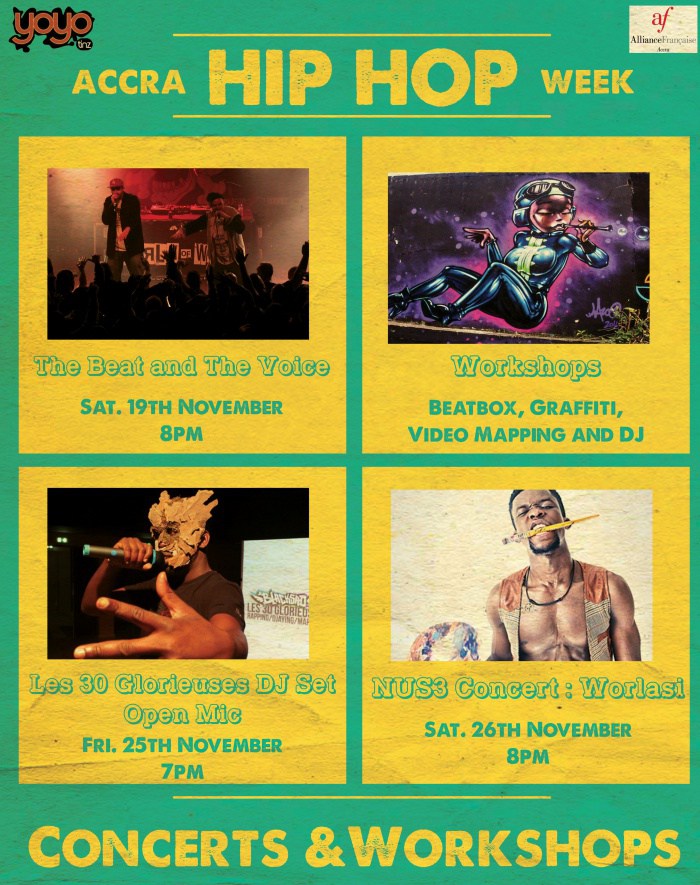 Alliance Française Accra and yoyo tinz will host the third edition of the Hip-Hop Festival from 19th to 26th November in Accra. The festival which had its first edition in Ghana three years ago seeks to celebrate the history and future of Hip-Hop in all its forms with a carefully planned series of events. The full week celebration will be laced with events and workshops that showcase the main elements of the hip hop culture which are:

An opening concert; THE BEAT AND THE VOICE by Yoshi Di Original (Zulu Nation/End of the weak) and Faya Braz (of beatbox world champion with his group Under Kontrol). This concert is an original collaboration of rap and beatbox on Saturday 19th November, 2016, 8pm. And a special Master class in Beatmaking/Beatboxing by Yoshi and Faya Braz from 12pm – 3pm before the concert. Rate: GHC 20 / GHC 10 for students & AF members / free under 16

Followed by a Graffiti Master class on Monday 21st – Friday 25th November, 2016 by a French award winning graffiti artist Lazoo, who will engage local artists in an educative workshop which will result in creating a beautiful mural on the walls of Alliance Française and other areas in Accra.

As part of the festival, there will be a Video Mapping workshop on Wednesday, 23rd November November, 2016 (10AM-12PM) by BA.BA a talented video mapper who will introduce participants to a growing art form that converges art, architecture and technology in video-projection which transforms our classic perception of spaces into new expressions.

Also, a DJ Master class on Friday 25th November, 2016 by DJ Foodj who looks forward to inspire passionate people who aspire to learn and improve their DJ-ing skills.

A hip-hop group from France called Les 30 Glorieuses will be on stage to dish out some amazing hip-hop tunes and visual effects. This special Friday night Open-mic session will also give the opportunity to upcoming rappers and hip-hop lovers to share the stage with Les 30 Glorieuses on Friday 25th November, 2016, 7PM. Rate: GHC 20 / GHC 10 for students & AF members / free under 16.

For the closing concert of the Hip Hop Festival, join Worlasi for the NUS3 Concert. Nus3 is the title of Worlasi’s debut mix tape/ album translated as Strength Within and it will be headlined by Worlasi alongside artists featured on the mix tape/album and other talented acts.

United States Signs Memorandum of Understanding to Support Primary Education in Sokoto State
Nigerian Students in the U.S. Up 12.4 % to 10,674, ranks #1 in Africa, #14 in the world as a source of U.S. international students
Advertisement