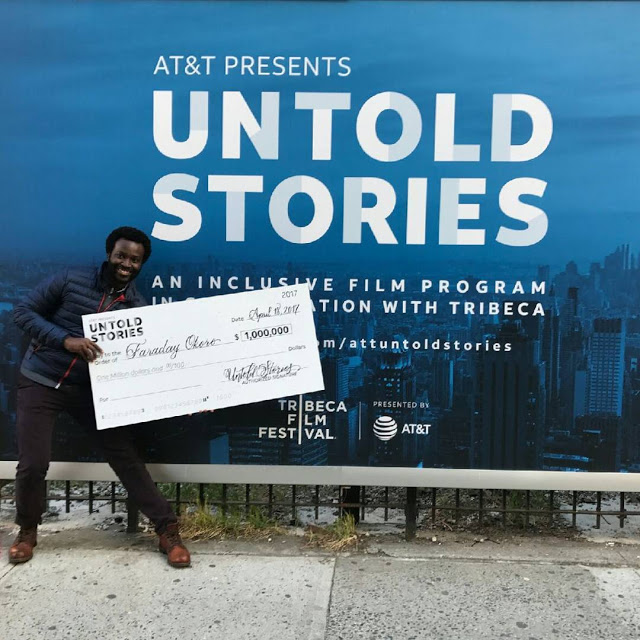 It’s been a whirlwind few months since AT&T and the Tribeca Film Festival gave Faraday Okoro $1 million to help produce his film, “Nigerian Prince,” as part of the AT&T Presents: Untold Stories program.

“Nigerian Prince” is about a Nigerian-American teenager sent to Nigeria against his will. To earn money to get back to America, he teams with his Nigerian cousin to scam unsuspecting foreigners.

Faraday Okoro spent many of hours on the road and in the air since April trying to pinpoint the perfect places and people to help bring the story to life. His most important trip was to Lagos, Nigeria, where they captured much of the film. They are going to shoot scenes for the movie both there and in Los Angeles.

Shooting in 2 locations also means they will have 2 sets of actors to work with. They have already completed their Nollywood casting. Yes, much like India’s Bollywood, Nigeria has adapted the word “Nollywood” to refer to its own entertainment industry.

By the way,  represent the 3 largest entertainment industries in the world!

The experiences working in both L.A. and Nigeria will be as different as their geography. They can’t apply an L.A. way of doing things in Lagos. They will need to adapt to the way they do things in Nigeria.

For instance, the pace is much slower. They will get used to it, and hopefully think it will contribute to the authenticity of our film. And being authentic is one of his most important objectives as a filmmaker.

It’s one thing to write about locations in a script, but everything comes into focus when you lay eyes on the exact environments. After his trip to Nigeria, He will no longer need to imagine what the places in his film might look like. Now, he can see the details of the airport corridors our actors will walk, the rooms in the house where his main character will live and many of the other places that will serve as important backdrops for his story.

They are now hard at work casting our L.A. actors now, but they don’t have any names to announce just yet. They will start filming in Nigeria later this month. Check back here for more updates, like information on how you can compete for $1 million in the second year of AT&T Presents: Untold Stories!

Watch over 155 Live Local Channels on DIRECTV NOW, Along with Access to SHOWTIME®, CBS Sports Network and Pop Coming This Month
‘Mexico is Still Open For Business’ – Mexico Tourism Board
Advertisement